What Is a Potager Garden, and How Can You Design One? 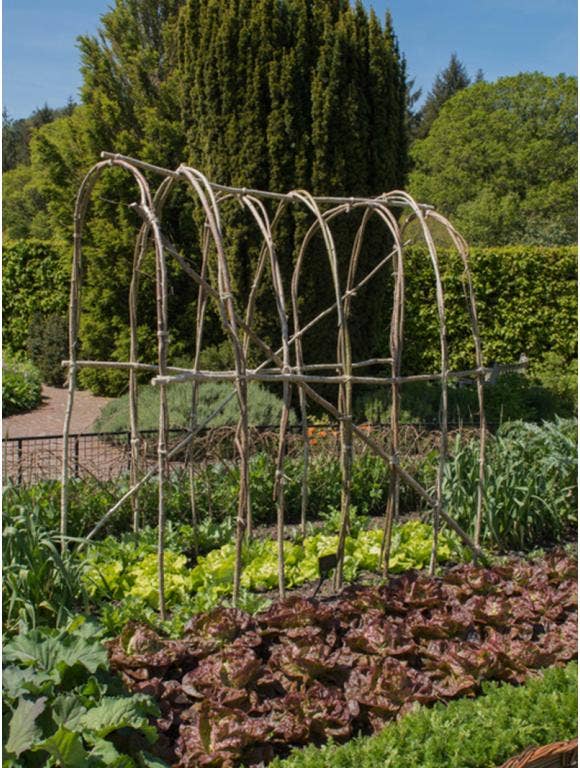 Do you long for a food garden that's both productive and beautiful? You may be envisioning a potager, an ornamental French kitchen garden that blends design with function.

What Is a Potager Garden?

During medieval times, monks in French monasteries cultivated "potagers" for growing the ingredients for a thick soup called potage. With four beds laid out in the pattern of the cross, these modest-sized gardens incorporated religious symbolism into a plot that was both productive and aesthetically pleasing. To maximize space and control pests, the monastic kitchen garden mixed flowering annuals, medicinal perennials and herbs with vegetables and fruits.

During the French Renaissance, the modest potager evolved into the fanciful "potager décoratif" of the nobility — a more elaborate and formal food garden designed as a feast for the seasons as well as the eye. The simple, practical potager evolved into the grander one with symmetrical, repetitive geometric patterns and knot layouts like the 17th-century Potager du Roi (kitchen garden of the king) at Versailles.

Contemporary potagers vary in style, from formal parterres to informal designs closer in appearance to the cottage garden.

How to Design a French Potager Garden

Potagers are ornamental food gardens planted primarily for culinary purposes. They're designed around seasonality to yield year-round fresh produce. Unlike the typical American food garden planted in the spring and harvested in the summer, the potager is continuously planted and harvested.

Symmetry, balance and repetition are key to potager garden design. Potagers aren't planted in rows but rather in an organized pattern of bordered beds, often raised, containing edible and ornamental plants in a diverse palette of colors, textures, shapes and heights. Basic potager design principles include:

Proximity to the Kitchen

These gardens are traditionally located close to the kitchen for easy access and so they can be viewed from that vantage point.

Potagers are typically enclosed within walls or bordered by hedges, either with natural edging like boxwood or with a built barrier. Enclosures define the garden's perimeters, provide vertical surfaces on which to plant and can keep destructive critters out of the garden.

The garden's beds are laid out in various patterns or grids. The beds may be rectangular, square, triangular or L-shaped, and assembled in simple or complex diagonal, diamond, zigzag or circular patterns. For easy access, keep beds no more than 4 feet wide.

Combining functionality with aesthetics, pathways made of materials such as stone, brick or gravel are integral to potager garden design. Practical for navigating freely around the garden, they also serve as a place to work alongside the beds. Pathways should ideally be wide enough for a wheelbarrow to pass through.

To establish a sense of order and draw the eye to the garden's central point, potagers traditionally include a focal point such as a tall obelisk, which is both decorative and functional for supporting climbing plants.

The potager's clean lines and ordered design is adaptable for small balconies and patios. Many of the same principles work in limited spaces, such as growing edible plants and ornamentals together in a variety of colors, textures and heights. Wall spaces accommodate vertical planters for climbing plants. Elevated beds set at right angles use otherwise empty corners to maximize space. Place a potted tree as a focal point and outdoor runner rugs in lieu of pathways.

Potagers are designed to bring beauty into the utilitarian food garden, so start by planting what you like to eat and cook.

After harvesting cool season vegetables like lettuce, asparagus, beets and broccoli in early spring, plant warm season varieties such as cucumbers, eggplants, lima beans and okra during summer and autumn. Consider staking tall tomato varieties that will continue to grow and produce fruit throughout the growing season.

Grow cucumbers and heirloom pole beans on a tower, a bamboo structure or over an archway to save space and increase yield. For a more formal and artistic element, espalier, or train to grow, an apple or pear tree against an empty wall.

Contrast heights with tall staked tomatoes alongside low-growing spinach. To attract beneficial insects, tuck edible and nonedible perennial and annual flowers in with the fruits and vegetables. For texture, combine shade-tolerant hostas with daylilies, then train vining nasturtiums up an ornamental structure.

What is a potager garden going to look like in your space? Get creative with the plants and design you choose.

For more inspiration, check out some of Burpee's fresh picks.