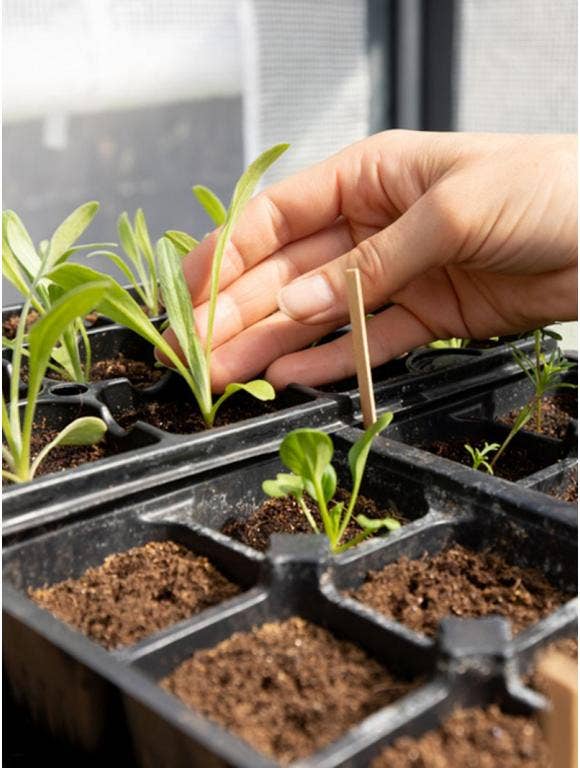 Sowing seeds is one thing, but getting them to develop into the plants you envisioned when you bought the seeds is another matter. While the most important thing to keep in mind when starting seeds is to not overwater, here are some other common issues you might run into when sowing seeds indoors and how to troubleshoot.

If your seeds aren't germinating, they may have been planted at the wrong depth. Always refer to the seed packet to see how deep to plant seeds. Many require only one-eighth or one-fourth inch of cover. If they're buried too deeply, they might not be able to reach the soil surface and break through. Also, some seeds sprout better without any covering, including begonia, coleus, strawflower, impatiens, nicotiana, petunia, salvia and snapdragon. Another reason for failed germination: soil temperature. If you're trying to start seeds in a cold basement, the soil may not be warm enough for them to sprout. If that's the case, warm the soil with a heated seed-starting mat.

If you have a low germination rate, the seeds could be old, which would affect their viability. Or they could have been damaged by environmental factors such as high heat, humidity or moisture due to improper storage. When storing leftover seeds, fold over the top portion of the packet several times, affix with a paper clip, then seal the packet in a paper envelope. Store seeds in a cool, dry, dark place.

When seedlings are slow to develop, it's often the result of sowing seeds too closely together. While sowing seeds close together is a good idea when using up old seeds that aren't as viable as fresh ones, it can cause problems if the germination rate is high and seedlings become crowded. Be sure to thin out plants if needed (the seed packet will provide spacing recommendations) so seedlings can develop to their full potential.

Spindly seedlings usually point to a lack of light, which is especially problematic during the shorter days of the year, when a lot of seed starting is happening. Supplemental light is your best bet when sowing indoors to prevent the development of spindly seedlings with thin, weak stems. Set seed trays within 4 to 6 inches of fluorescent lights that remain on for 16 hours a day. As seedlings get taller, you may need to adjust the height of the light.

Seedlings that look healthy one day and are dying or dead the next are often suffering from damping off disease, a soil-borne disease caused by fungus or mold. It's most prevalent in cool, moist conditions. To prevent this, sterilize seed-starting pots and trays with a 10% bleach wash. Thoroughly rinse with water and allow trays to dry, then fill with soilless potting mix. Good air circulation is also helpful, so consider setting up a fan nearby, but don't use a fan directly on the seedlings as this could harm them.

Dried out soil is never a good thing. It can prevent seeds from sprouting, and it can be a death sentence for newly developing seedlings that depend on moisture. To prevent this, moisten the soilless seed-starting mix, sow seeds, then cover with clear plastic to create a greenhouse. You can use plastic wrap, held above the soil line with sticks, or a clear plastic lid, which is often sold with seed-starting trays. Remove the plastic covering as soon as the seeds sprout.

Too dry and your seeds may survive to sprout another day. Too wet, well, that's what you might call rotten luck — for you and (literally) the seeds. Seeds will rot in wet soil and even if they do manage to sprout, they won't be able to develop much of a root system due to root rot. Wet soil can also be a breeding ground for soil-borne diseases. The soil mix should be moist, not sopping wet. If you see white or green mold on the soil surface, that's one indication the soil mix is too wet.

Seedlings Are Bunched Up

So the seedlings didn't necessarily pop up where you thought they would? You may have accidentally dislodged them when you watered. This is easily avoided. First, pre-moisten the seed-starting mix before sowing seeds. Second, when working with small seeds, invest in a seed dispenser for more even distribution. Or make one yourself by folding a piece of construction paper, setting seeds in the crease, then distributing them with the aid of a toothpick. Finally, when watering the seedbed prior to germination, use a mister rather than a traditional watering can.

Although the seed itself contains everything needed for germination and early development, fertilizer will be needed at some point. You'll know a boost of fertilizer is needed if the leaves are pale, discolored or purple around the edges. Wait till seedlings develop their second set of true leaves (as opposed to the seed leaves, called cotyledons), then apply a water-based fertilizer at half strength every two weeks. Be sure to follow the fertilizer instructions on the label.

There's a lot that can go wrong when starting seeds, so set yourself up for success with Burpee's seed starting supplies.