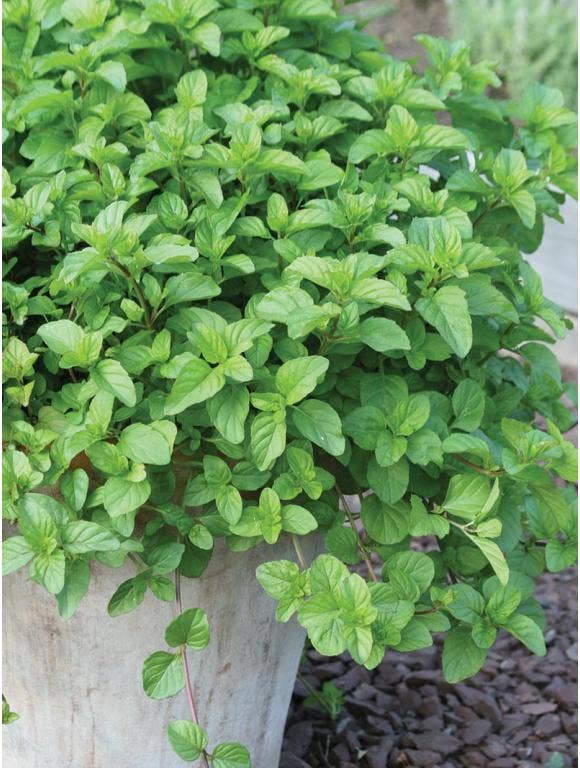 Officially named Lamiaceae, the Mint Family includes some of the most important and popular plants for gardens – and kitchens! Worldwide there are over 200 genera and over 6,000 species, mostly herbaceous plants but some shrubs and trees (such as teak). Many of them offer a triple whammy of benefits: beauty, taste, and scent.

A few familial characteristics shared among most Mint Family relatives are square stems, opposite leaves, tiny flowers, and volatile oils in their leaves and stems, which gives them their entrancing fragrances and flavors (and usually makes them deer resistant as well).

As far as taste, where would we be without basil for pesto, mint for juleps, or oregano for spaghetti sauce? And herbal teas would surely go wanting without bee balm (also called Oswego tea) as a key ingredient. Other culinary Mint Family stars are rosemary, savory, marjoram, sage, lemon balm, and thyme.

Of the culinary herbs, basil and mint have perhaps the widest range of choices. Basil has forms that are purple (‘Purple Ruffles’), tiny-leaved (‘Boxwood’, ‘Spicy Globe’), large-leaved (‘Lettuce Leaf’, ‘Mammoth’), and with special scents (‘Cinnamon’, ‘Licorice’). Mint varieties can call to mind not only different types of minty-ness like peppermint and spearmint, but also chocolate, ginger, apple, orange, pineapple, and banana.

Generally Mint Family relatives are easy to grow, sun loving, and drought tolerant. While many of them have purple or blue flowers, you can also find red, orange, yellow, pink, and white. The foliage is often as attractive as the flowers, with interesting textures, fine hairs that catch the light, or colorful markings. Seeds of Mint Family plants are typically tiny, so if you’re propagating them that way, it’s better to start seedlings in small pots before planting them out in the garden.

Something else for gardeners to note: Members of the Mint Family are extremely important plants for pollinators, including bees like honey bees, which make good use of the abundant pollen for food and numerous nectar-rich flowers for honey production. (Melissa, the Latin name for lemon balm, a veritable bee magnet, actually means “honeybee” in Greek.)

In the scent category, Lamiaceae members have been invaluable over the centuries for perfumes, soaps, cosmetics, household cleaners, potpourri, and sachets. The queen of fragrant herbs is surely lavender. Though billowing fields of its purple flowers are a classic image for the Provence region of France, it has long been popular elsewhere in the world.

Traces of lavender have been found in perfume bottles in Egyptian tombs, and it was such a key ingredient for Roman baths and laundry that the Latin word lavare, meaning “to wash,” inspired the common name lavender and botanical name Lavandula. Another important fragrance plant is patchouli. Native to tropical Asia, for hundreds of years it has been incorporated into perfumes, incense, and even insect repellants.

Historically members of the Mint Family have also been important medicinal plants, thought to cure everything from indigestion to headaches to insomnia. Horehound (Marrubium vulgare) has been used since the first century for lung problems and still finds its way into cough drops and cough syrups (and old-fashioned candy). In Asian folklore, Perilla (shiso or beefsteak plant) has been treated with great respect as a cure-all for every malady. And the native mountain mint (Pycnanthemum) was deemed so potent by American Indian medicine men that it was considered powerful enough to bring those on their deathbed back to life.

No other plant family can be found in so many places in our lives – from garden to kitchen to linen closet to medicine cabinet!