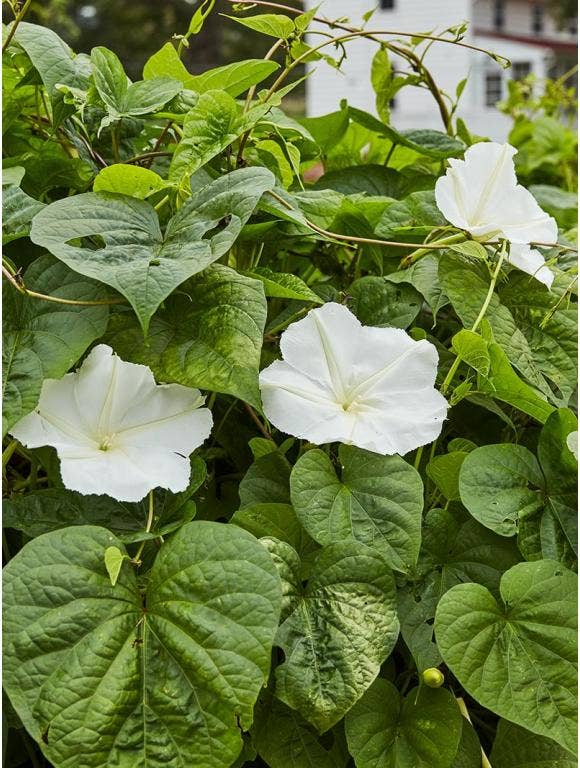 When most flowers tuck in for the night, others only open their petals after dark. After the sun sets and the moon rises, night-blooming flowers put on a pageant of bright-white and silvery or pale-colored blooms, their petals reflecting against the moonlight to set the garden aglow. Their luminescence and intoxicating fragrances allure nocturnal pollinators that feed on their nectar. Alight with mystery and romance, the moon garden is an experience of sight and scent.

Flowers That Bloom at Night

Often called "moonflowers," these nocturnal species vary in color, shape, size, fragrance and blooming length. Some unfurl every night of their flowering season, while others bloom for just a single night.

In the 1930s, night-blooming cereus enthusiasts in Jackson, Mississippi, would gather to observe and celebrate the flower's annual single night bloom. The Southern writer Eudora Welty and friends even formed the Night-Blooming Cereus Club, adopting the motto "Don't take it cereus. Life's too mysterious."

A number of night-blooming flowers bloom for more than a single night. White and light-colored yellow, pink and lavender flowers, as well as those with silvery, gray and variegated foliage, appear illuminated as they glow by the light of the moon.

A robust climber with blue-green leaves and large, white trumpet-shaped flowers, the moonflower prefers to crawl up a trellis or other support and can potentially become invasive. It blooms at dusk and stays open until the sun comes up, and maybe a bit later on cloudy days. Moonflower is an annual in zones 8 through 12 and a perennial in milder areas.

An annual named for its bloom time between 4 p.m. and 8 p.m, a single four o'clock plant may produce several flower colors that attract hummingbird hawk-moths. The abundant sweet lemony-scented, trumpet-shaped blooms may blossom bright yellow, magenta or white with splashes of pink, orange or yellow.

The tropical shrub's tubular flowers may be tiny, but night-blooming jasmine's perfume spreads 20 feet. Hardy to zone 8, the plant blooms from spring through fall and flourishes in containers.

Flowers That Glow at Night

White flowers beautify the daytime garden, then glow by the light of the moon at night.

Flowers With Intense Scents at Night

This elegant annual or short-lived perennial has long white and pink flowers that emit an intense fragrance in the evening. Nicotiana (aka flowering tobacco) can be grown at the back of a border or in a large pot.

A symbol of purity, peace and innocence, tuberose's richly fragrant tender bulb produces clusters of white blooms that reflect moonlight as they fill the air with fragrance.

With its strongest scent at night, wisteria can be grown over a pergola or against a house wall where you can sit nearby to enjoy the fragrance.

Moon gardens attract beneficial nocturnal pollinators that navigate the garden by moonlight, lured by the thick fragrances of night-blooming flowers. Moths, bats, mosquitos, some species of bees and beetles, and fireflies forage at night when there's less competition for nectar after the day-active insects have settled in for the evening.

Tropical and desert habitats depend on bats to pollinate over 300 fruiting plant species. With their keen sense of smell, sphinx moths may head right for highly perfumed moonflowers, while night-pollinating native sweat bees may gravitate toward lilacs.

How to Design a Moon Garden

Choose a location bathed in moonlight, avoiding areas where trees or walls may cast moon shadows. Since there will be moonless and overcast nights, select a spot that will also receive indirect light from a window, porch lamp or landscape lighting to reflect off of the evening's flowers.

Create a night tapestry of blended colors, scents, textures and sizes, interspersing the white and silvery flowers among the pink, purple and yellow ones. Although they bloom at night, most night-blooming plants need at least six hours of direct sunlight.

After a long day, the lunar garden offers a rich sensory experience of explosive scent and glowing light.