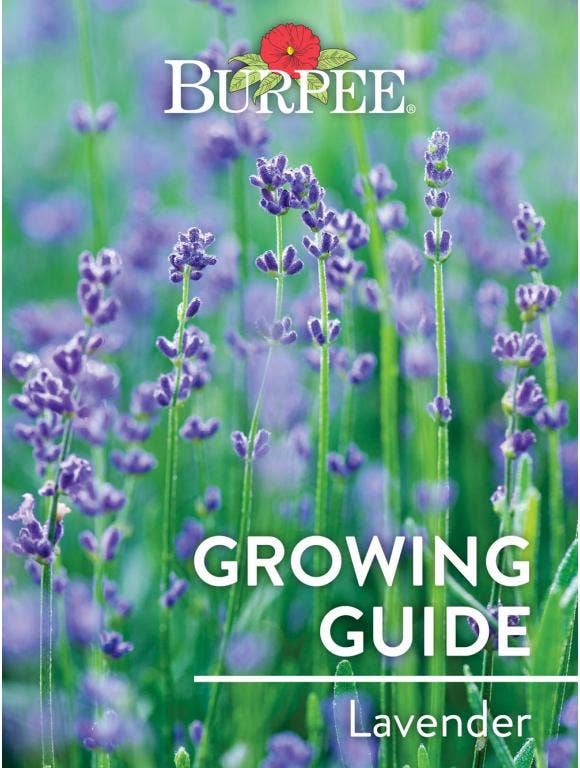 Lavender may be grown from seed sown early indoors and transplanted outside after frost, or planted as a potted plant

Alfalfa Mosaic Virus: Leaves will turn yellow and begin to curl. Bright yellow patches appear on leaves and shoots which may also appear tristed. The plants have reduced vigor. It is spread by aphids and tools and hands and is very infectious. Burpee Recommends: Remove infected plant, with gloves on and tie off tightly in a paper bag and dispose immediately. Always use gloves when working around plants.

Downy Mildew: Leaves turn yellow around the middle vein and the disease spreads, eventually turning grayish purple and fuzzy. Burpee Recommends: Make sure the plants have plenty of air circulation, avoid getting water of the foliage when watering, remove infected plant material. Do not plant susceptible plants in the same location next year. Planting in containers can help.

Root Rots: A number of pathogens cause root rots of seedlings as well as mature roots. Burpee Recommends: Practice crop rotation and do not plant related crops in the same area for several years. Pull up and discard infected plants. Make sure your soil has excellent drainage. Contact your Cooperative Extension Service for recommendations.

Septoria Leaf Spot: This diseaseis most severe during rainy seasons in closely planted gardens. Small circular spots with gray centers and dark margins appear on the lower older leaves on the edge.  Fungi spores are produced and darken the center of the spots. Affected leaves may drop off and the plant is weakened.  Burpee Recommends: Remove and destroy infected plant debris. Don't handle or brush against plants when they are wet. Rotate plantings. Remove weeds growing nearby.

Aphids: Greenish, red, black or peach colored sucking insects that can spread disease as they feed on the undersides of leaves. They leave a sticky residue on foliage that attracts ants. Burpee Recommends: Introduce or attract natural predators into your garden such as lady beetles and wasps who feed on aphids. You can also wash them off with a strong spray, or use an insecticidal soap.

Four-Lined Plant Bug: These insects pierce the plant tissue and suck the juices leaving clear spots on the leaves. They have four yellow lines on their black backs. Burpee Recommends: Because they over winter in garden debris, remove all debris after the first frost. Contact your Cooperative Extension Service for insecticide recommendations.

Mealybugs: Mealy bugs are 1/8 to ¼ inch long flat wingless insects that secrete a white powder that forms a waxy shell that protects them. They form cottony looking masses on stems, branches and leaves. They suck the juices from leaves and stems and cause weak growth. They also attract ants with the honeydew they excrete, and the honeydew can grow a black sooty mold on it as well. Burpee Recommends: Wash affected plant parts and try to rub the bugs off. They may also be controlled by predator insects such as lacewings, ladybugs and parasitic wasps. Check with your Cooperative Extension Service for pesticide recommendations.

Spittlebugs: These hopping insects protect themselves from predators with a white foam while the young insects feed on the leaves and stems. When the insects emerge they are hoppers with large "froggy" eyes. There is only one generation each year but the larvae can hatch over a period of several weeks as the eggs were laid in the fall. Burpee Recommends: To control wash the foam off with a strong water spray. This will usually also kill the larvae. Do this once or twice a week for as long as needed. The damage is usually minimal.

Whitefly: These are small white flying insects that often rise up in a cloud when plants are disturbed or brushed against. Burpee Recommends: They are difficult to control without chemicals. Try hot pepper wax or insecticidal soap. Check with your Cooperative Extension Service for pesticide recommendations.

When should I cut my plants back? Plants should be cut back and cleaned up towards the end of the growing season. Remove growth to 3-4 inches from where the stem becomes woody. Do not cut into woody stems except to remove whole stems. New stems will not form from wood.

What parts of lavender are edible? Although lavender is not toxic, only unopened flower buds contain the oils used in cooking.

Can I grow lavender in a container? Smaller varieties of lavender are fine for containers. Be sure to use a commercial potting mix rather than garden soil. Use a clay pot with drainage.

If part of my plant died, is the whole thing going to die? Sometimes parts of lavender will die back which part of the plant looks fine. Prune out the dead wood, make sure the roots are healthy and there are no pest or disease problems and the rest of the plant may be fine.