Posted in: Gardens by Type, Get Started, Gardening 101: How to Begin, Fruit Gardening

Imagine a fruit with kiwi flavor, but sweeter, grape-sized and fuzz-free. Such a thing exists and we can grow it in our backyards with ease. Not surprisingly, this fruit is called hardy kiwi.

“People really like the taste of kiwi. It’s a different fruit. And with hardy kiwi, you can just pop it in your mouth without peeling because it doesn’t have the fuzzy skin,” said fruit grower David Garretson of Beechwood Orchards in Biglerville, PA.

The kiwi we are most familiar with is native to China and won’t tolerate temperatures lower than 10 degrees. Hardy Kiwi can be grown as far north as zone 6. Garretson said that a late spring cold spell can damage some tender new growth but hardy kiwi grows so quickly, it can compensate for the loss.

Hardy kiwi is an excellent fit for backyard growing. The vine grows very quickly, is attractive and, importantly, it’s not super fussy. “Kiwi doesn’t take a lot of spraying,” said Garretson. Like raspberries, strawberries and blueberries, kiwi does not require the treatment regiment that might be required to produce vigorous and cosmetically appealing stone fruits like peaches.

The ornamental appeal of hardy kiwi helps maximize space in home landscapes by doing the double-duty of looking good while producing fruit. Reddish vines with rich green leaves and fruit are kiwi’s decorative qualities. Our Kiwi, Hardy Red, adds extra late summer appeal as the fruit ripens red. Consider growing hardy kiwi on a pergola or trellis in a sunny spot in your ornamental garden. One plant can grow 15 feet in one year, so it will quickly fill-in and cover the structure.

One plant will get large quickly but two plants – a male and a female – are required to make fruit. Our sets include one of both. If you’d like more plants or would like to try other varieties, you can often purchase only females because you only need one male for approximately every six females. The age of the plants has an impact on fruiting.

Hardy Kiwi takes a few years to produce fruit. Depending on the age of the vines you purchase, it could be one to three years before fruit is made. Yields will increase after the first year. Male plants need to be older than the females to perform their function.

Like many fruits, hardy kiwi needs full sun and consistent moisture to thrive. Give your kiwi rich and well-drained soil and you’ll be rewarded with vines that romp and sweet fruit. Kiwi does not like wet soil or drought. Roots can be damaged if the roots are too wet. Drought will stress the plant and effect the size of the fruit. Prolonged lack of water can cause fewer blooms early in the season and fruit to drop before it’s ripen later in the season. Deep soakings rather than constant shallow watering during dry spells will help produce the best fruit.

Support is also important to kiwi. Garretson suggest starting out by staking the vine, then install a trellis to support the vine. Typically, kiwi is grown on T-shaped structure several feet off the ground for ease of picking. Create a trunk by pruning off laterals from the main vine in the dormant season along the vertical part of the T structure. Gently direct the main vine to the top of the T. Attach vines to supports to prevent breakage.

Once kiwi is mature enough to make fruit, you’ll notice that the fruit reach full-size by midsummer. Kiwi won’t ripen to its full sweetness until late summer – sometimes into September. Kiwi will continue to ripen off the vine, and will keep longer if picked just a bit before ripe. If picked too soon, the full sweetness won’t develop. To test, pick a few, allow them to ripen on a counter or in a window sill for a few days. If the kiwi becomes sweet and soft, it’s time to harvest. Storing kiwi in a refrigerator will keep them from ripening. Take out and ripen kiwi as needed.

Kiwi that’s ripened on the vine is delicious, too, but it won’t store as long. All kiwi should be picked before the first frost.

Consider adding hardy kiwi to your home garden. The vine is hearty, decorative and extremely long-lived. The fruit is fuss and fuzz-free, tasty, unique and stuffed-full of vitamin C. It’s an adventure to add to your garden. 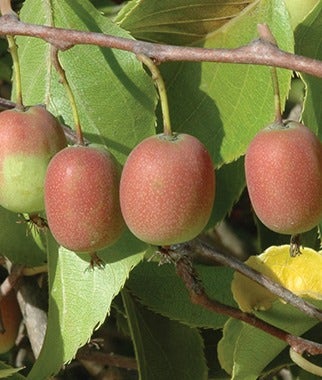