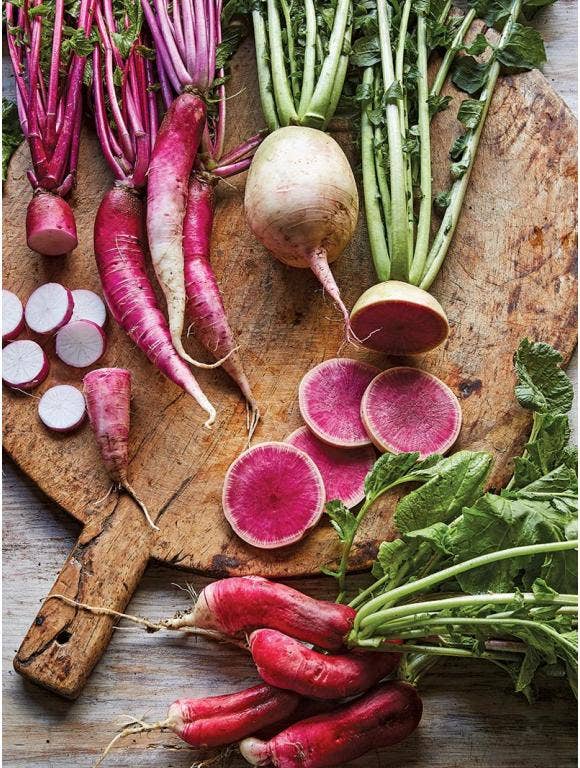 Can I Grow Radishes?

Although among the easiest and fastest vegetables to grow, radishes can be overwhelming. Every seed in a generous packet sprouts and very shortly literally hundreds of radishes are demanding harvest. If a few radishes sliced into a salad or carved into rosettes as a garnish seem to exhaust their culinary possibilities, get ready to discover new and unusual ways to prepare lots of these tangy springtime favorites.

Radishes are perfect for new and especially young gardeners. For impatient kids looking for quick rewards, radishes are as close as they can come to instant gratification. Radishes are so fast growing your children will be pulling the succulent roots in as few as 21 days from sowing! Some gardeners wouldn't think of picking up a hoe without putting a packet of radishes in their shirt pocket. Dropping seeds among slower growing vegetables means double harvests- radishes first, broccoli later.

There are two basic types of radishes- spring and winter. The crunchy spring varieties, 'Cherry Bomb', 'Champion', 'Burpee White', and 'Crimson Giant' should be planted in early spring to mature as quickly as possible in cool weather for the best production and quality. Most spring radish varieties mature in less than a month.

Winter radishes such as 'China Rose' and Long Black Spanish' require a longer growing period but are superior to spring types in many ways. They hold their quality in the garden longer, store better, and have a more distinctive flavor. By growing a number of varieties from both types, you can be harvesting radishes throughout the spring, and again in the fall and winter.

Although radishes are easy to grow, knowing when to harvest is the key to perfect radishes with crisp roots and mild flavor instead of hot as fire and as pithy as corks. For the best radishes, plant them in a friable soil when the weather is cool and provide constant moisture. Because the spring varieties, in particular, mature rapidly, you must pull radishes before they pass their prime. Radishes that have been left in the garden too long will be fit only for the compost pile. The best way to determine when to harvest is to simply push back a little soil to see if a bulb has grown and then pick and taste a few. Radishes are not nutritional giants. They are a fair source of vitamin C and iron, but aren't eaten in sufficient quantity to be significant sources of either. It's their crisp taste, that extra zing they add to salad and a variety of other dishes that make radishes welcome in the kitchen.

Radishes probably originated in China. They are certainly revered and highly appreciated in the Orient, particularly in Japan where the long, white daikon radish is a major food. The ancient Greeks prized radishes above all root crops, even making replicas of them in gold. The root crop was a common food in Egypt long before the pyramids were built, and was popular in ancient Rome as well. The word "radish" is a derivation of the Latin word "radix," or root. Columbus and the early settlers brought radishes to America. Today, radishes remain a favorite crop for home gardeners because they're so easy and quick to grow.

How To Cultivate Radishes

As soon as the garden's soil is workable in the spring, put on some warm clothes and plant a first sowing of radishes. Choose a site that gets at least six hours of sun a day. Prepare a light, well-drained soil with a pH of 5.8 to 6.8 for best production. Till the soil to a depth of at least eight inches, particularly if you are planting the longer varieties like 'Summer Cross' and 'White Icicle'. Then, to sow the seeds, simply make furrows about three inches apart and plant the seeds at a depth of about 1/2 inch and cover loosely with soil.

Make small weekly sowings, trying different varieties to obtain a wide mix of radishes. Because most spring varieties mature in less than a month, succession plantings ensure a steady supply of radishes. When warm weather (65 degrees or higher) arrives, stop sowing as radishes will not tolerate heat and will rapidly go to seed. However, in late summer, plant winter varieties as well as spring varieties for quick harvests in the fall.

When making succession sowings, keep in mind that the longer varieties of radishes tend to tolerate heat better than the short, round ones. Start in early spring with the small types ('Champion' and 'Burpee White'), followed by the blunt radishes ('French Dressing' and 'French Breakfast'), and finally plant the longer varieties ('White Icicle' and 'Summer Cross'). This way, the smaller radishes will have been harvested before summer arrives.

There's no need to devote whole sections of the garden to radishes. Simply sow them in any empty spaces in a bed. Gardeners often sow quick-growing radishes in the same beds as slow-growing carrots, parsnips, and beets. The radishes are harvested before the other vegetables need the space.

Consider the following five tips to get the best radishes production.

The worst invader of the radish patch is the root maggot. Luckily, this pest is easily avoided with a proper crop rotation. Never plant radishes in a bed that contained a cole crop in the last three years. If you incorporate plenty of wood ashes in the soil, the maggots shouldn't present a problem.

Radishes are virtually disease-free. Long radishes sometimes develop black root that produces dark spots at the bottom of the roots. If this is a persistent problem in your garden, grow only the round radish varieties.

Because they mature so quickly, spring radishes should be checked frequently as they mature. The reason many gardeners fail with radishes is because they leave them in the ground too long. When mature, pull the roots whether you need the radishes immediately or not, and cut off the leaves. Put the radishes in plastic storage bags in the vegetable crisper of the refrigerator. Use them in a week or two.

Winter radishes, on the other hand, don't mind a little neglect. Although they can be stored in moist sand in a root cellar, winter radishes keep right in the garden under a heavy straw mulch through the winter. Pull radishes before they show new growth in late winter or early spring.

If some radishes bolt before you have a chance to harvest them, leave a few to develop seedpods. The seedpods, which look like tiny bean or pea pods, are actually quite tasty in a salad.

Radishes are more versatile in the kitchen than many gardeners realize. Besides adding crisp radishes to salads, try them sliced into stir-fries, stews, and soups. Marinate sliced radishes in vinegar, honey, and soy sauce to serve in a number of Chinese dishes. Sauté them in butter for a minute, and then serve with salt, pepper, and herbs (especially chervil) for a different and unusual side dish. Long radishes are particularly good for sautéing. Slice them diagonally to obtain larger pieces and cook quickly to retain crispiness. Grate radishes into your favorite slaws, or dice them for egg and potato salads. Winter radishes can even be pickled!

See all our Radishes