A Guide to Planting Ornamental Grasses 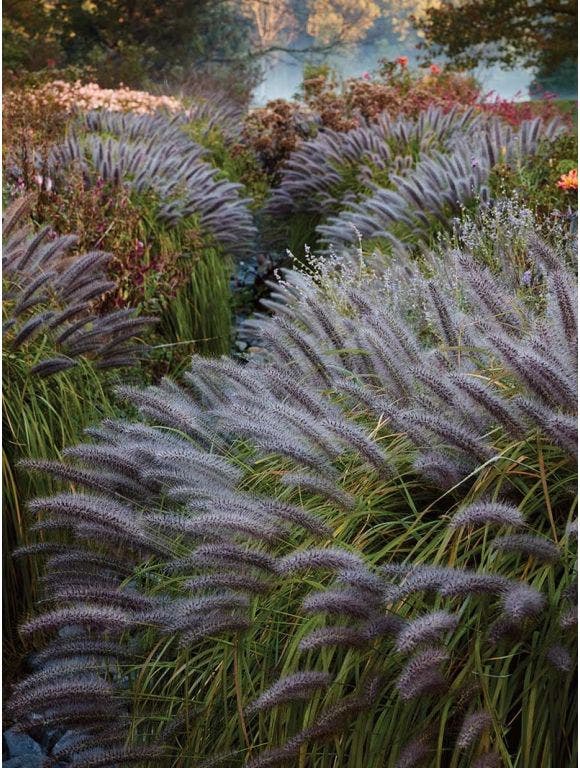 Gardeners planting ornamental grasses select them for their variety of heights, shapes and colors that add beautiful texture, depth and motion to the landscape throughout the seasons.

Quick-growing and low-maintenance ornamental grasses are a great choice for busy gardeners as they need less attention than other plants. Most flourish in moderately fertile soil, and many are drought tolerant. Grasses are relatively pest and disease resistant and great for the ecosystem as they attract important pollinators to the garden.

Although some are annuals, most ornamental grasses are perennials that last two or more years. Choose grasses appropriate for your hardiness zone, but also consider when you'd like them to bloom.

Cool season grasses bloom in spring before temperatures rise above 75 degrees Fahrenheit and also in cooler fall temperatures. They're generally colorful throughout the summer, but hot temperatures will slow their growth.

Warm season grasses begin blooming in mid to late spring or early summer, showing major growth and flowering in hot weather, then generally becoming dormant in shades of buff and brown in winter.

As colorful summer blooms begin to fade, ornamental grasses take center stage, providing a dramatic show of color and texture throughout fall and winter. Combine both cool and warm season types for a pageant of grasses that provide visual interest for about six months. Plant cool season grasses in front of warm season types so when the early ones go dormant, the later grasses will display graceful movement as they rustle in the breeze.

Clumping or Spreading Types of Grasses

Classified according to their growth habits, ornamental grasses can be either clump-forming, like 'Blue Fescue,' or spreading — often called "running" grass. Select grasses whose growth habits work well with your garden's design and will also make good companions for other plants.

Many gardeners select clump-forming varieties that grow in neat mounds as they mix well with many other plants. Clumping grasses increase in size slowly over time and won't become invasive.

Pay attention to spreading grasses, such as some Cortaderia (aka pampas) grasses, that can rapidly become invasive and overtake other plantings. However, these more aggressive running grasses do have a place in certain gardens as they're useful for filling in large areas and can help reduce soil erosion on slopes.

When to Plant Ornamental Grasses

To give them adequate time to establish good root systems before winter, the best time to plant ornamental grasses is in the spring or early fall. With their elegant plumes, quick-growing ornamental grasses can provide interest and color from summer through winter.

How to Plant Ornamental Grasses

When planting your garden-ready plant, a little help in the beginning will get your ornamental grass off to a good start. Add some compost to the soil where you'd like to plant. If your soil is dry when you transplant, fill the planting hole with water before setting in the new plant, then place the plant, fill in the soil around it and water again.

While most ornamental grasses do best in full sun, several, like ground-hugging 'Aureola' Hakonechloa, will thrive in partly or fully shaded areas such as under trees. In general, grasses need well-drained soil.

At the beginning of the first season after planting ornamental grasses, water them well so they'll develop a good root system. Depending on the species and the site, established grasses don't need regular watering, except during heavy drought periods, and many sun-loving grasses are drought tolerant.

Protecting in Winter, Cleaning Up in Spring

You don't need to cut back ornamental grasses before winter. Leaving them standing helps protect the crowns and maintain interest in an otherwise dreary winter garden. Some semi-evergreen varieties, such as 'Blue Fescue' with its silvery-blue blades, will provide color and texture throughout winter. As a bonus, tall grasses can function as a barrier at the edge of a driveway to keep snow from drifting across it.

As dormant ornamental grasses maintain their structure, they provide winter cover and shelter for wildlife while also supplying organic matter to enrich the soil.

Cutting Back and Dividing Ornamental Grasses

To accelerate growth in the spring, cut back the foliage to about 4 to 6 inches before growth resumes. To simplify the task, bundle the stems with tape or twine and cut them back to a height of 4 to 6 inches.

You can divide ornamental grasses either to produce more plants, reduce the size of a large clump, stimulate new growth, renew an overly mature plant's vigor or spruce up the appearance of a plant that has died out in the center.

Most grasses need division every two to three years. Always divide them when they're actively growing but not while they're flowering. Divide cool season grasses in spring and in early fall, warm season grasses any time in spring through midsummer and evergreen grasses only in spring.

Ways to Design With Ornamental Grasses

Ornamental grasses have a place in a variety of garden styles. Their feathery plumes and seed heads can complement perfectly clipped hedges and neatly planted rows or populate a landscape that's relatively undisturbed as it would be in nature.

When planting ornamental grasses, experiment with those whose forms and shapes harmonize with other plants in your garden. Combine grasses of contrasting heights, textures and colors with flowers and herbs, and pair low base-level plantings with tall, airy grasses. Try mixing flowering 'Glitterati Purple Star' pentas and 'Bonariensis' verbena with tall grasses such as panicum or Calamagrostis.

Have fun exploring the broad range of available color palettes, from multiple shades of green, blue and purple to rosy red, candy pink and creamy yellow. Plant shimmery metallic silver, gold and white ornamental grasses that will dance in the breeze and glow in the moonlight.

Introduce some towering plumes into a mixed border, or use them for zoning the garden to create distinct al fresco living areas or "outdoor rooms." Group taller grasses, such as 'Pink Pampas' Cortaderia, together to form a living privacy screen or to mark the edges of pathways, and use fluffy, billowing varieties to soften hardscaping. A sea of grasses can replace a lawn, while a few select specimens can create a dramatic focal point.

To take your garden to the next level, check out our selection of ornamental grasses in the Burpee catalog.