Chairman, W. Atlee Burpee Company
By the time George Ball entered middle school, he was harvesting petunia seed for his family’s Pan American Seed Company, a major flower breeder and seed producer.  During high school and college he apprenticed in Costa Rica for Claude Hope, the renowned plant explorer, impatiens breeder and hybrid seed production innovator.  In 1981, after studies at Bard College and DePaul University, he reentered Pan American Seed; in 1984 he was named president of the company.  Under his direction, PanAmerican expanded further into the European and Japanese markets.  With the help of his colleagues, Mr. Ball introduced the first large-flowered hybrid anemone, ‘Mona Lisa’, to the cut flower auctions of Holland, Japan and eventually the rest of the world.

Mr. Ball led his family business’s 1991 acquisition of W. Atlee Burpee Company; in 1995, he purchased the controlling interest.  Mr. Ball has introduced hundreds of innovative, high quality flower, fruit and vegetable varieties.  In addition, he has worked on vegetable seed relief projects in Somalia, Rwanda, Haiti and Afghanistan.  In 2004, working with the Coalition Advisory Partnership and the U.S. Department of Defense, Mr. Ball organized the world’s largest airlift of vegetable seed to Iraqi farmers.

Mr. Ball funds gardens for schools, churches, community centers, parks, hospitals and mental health care centers.  In 2011, he introduced “The Welcome Home Garden” in conjunction with the U.S.D.A. which was distributed to 175,000 recent veterans.  In 2014, he distributed a million packets of the “Bee & Butterfly Garden” for the National Parks System.

As the youngest president in the history of the American Horticultural Society (1990-1993), Mr. Ball restored it to solvency and started a series of annual international children’s gardening symposiums that continue to this day.  He served as chairman of Petoseed (1990-1992), and of the Ball Foundation (1998-2002), trustee of Bard College (1995-2001) and trustee and second vice president of The Orme School (2012-2014).  He is chairman of The Burpee Foundation and trustee of The Horticultural Society of New York.

Mr. Ball's awards include the Wilfred Jung Distinguished Service Award from the Garden Writers Association of America, the Outstanding Achievement Award from the Horticulture Society of New York, the President's Medal of Appreciation from the American Horticultural Society and the "Design 100" from Metropolitan Home Magazine.

In 2016, Mr. Ball was awarded the degree of Doctor of Science, honoris causa from Delaware Valley University in recognition of his outstanding accomplishments. 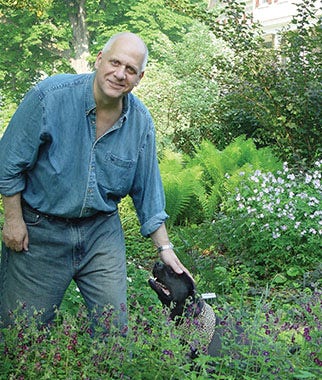