Posted in: Other Fruits 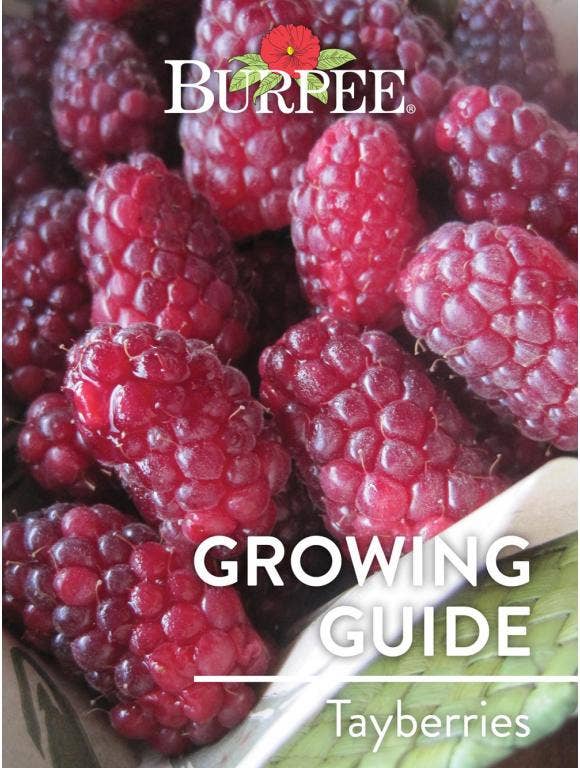 Crown Gall: Rough, wart-like growths or galls appear on the crown at or just below the soil surface. These can also form on the stems or canes of tayberries. Plants can become stunted, subject to drought stress and wind damage. Large enough galls may cause girdling which results in plant death. Burpee Recommends: Examine the canes prior to planting for any indication of galls. Avoid injury of the plant. You can remove the gall if it is small enough by cutting around it into healthy wood allowing that area to dry out, cutting into healthy tissue as little as possible. If plant is severely infected, remove it.

Orange Rust: This fungus causes plants to become stunted and weak with poor fruit production. Shortly after new growth appears in spring new shoots are weak and spindly, leaves are pale green to yellow. In a few weeks lower leaf surfaces are covered in bright orange powdery spores. Affected leaves wither and die by early summer. The disease is systemic, and remains throughout the plant so just removing infected leaves will not improve the health of the plant. Burpee Recommends: Dig up and remove infected plants and destroy nearby wild brambles. Remove plants before the spores are discharged if possible.

Phytophthora Root Rot: This soil borne disease thrives in poorly drained soils and can live in the soil for years. Above ground symptoms include pale or reddish leaves, small leaves, defoliation, branch die back, stunting and death. Burpee Recommends: Remove infected plants. Do not plant related plants in the same area.

Powdery Mildew occurs on the top of the leaves in humid weather conditions. The leaves appear to have a whitish or greyish surface and may curl. Burpee Recommends:  Avoid powdery mildew by providing good air circulation for the plants by good spacing and pruning. Contact your Cooperative Extension Service for fungicide recommendations.

Verticillium Wilt: This soil borne disease causes a wilting of the leaves and stems on several branches. Leaf margins cup upward, leaves turn yellow and drop off. If fruit is produced, it is usually smaller than normal. Like fusarium this will enter through the roots, migrating up the stem and plugging a plant's transport vessels. It is transmitted in the soil. It can also be spread by water and tools. Burpee Recommends: Remove and burn crop debris. Contact your Cooperative Extension Service for fungicide recommendations.

Borers: Larvae are worms with whitish bodies with brown heads about 1 inch long. The adults are clear-winged moths with black and yellow bands on their bodies. The larvae tunnel in canes and cause lateral growth to wither and canes to die. Burpee Recommends: Prune and destroy infested canes.

Japanese Beetles: Burpee Recommends: Hand pick early in the morning into a bucket of soapy water.

Leafhoppers: These appear in varying shades of green, yellow and brown, are very active, slender and wedge shaped. They can leave foliage pale and curled and leave secretions on the plants and fruit. They can spread disease. Burpee Recommends: Try insecticidal soaps. Contact your Cooperative Extension Service for control assistance.

Are there seedless tayberries? Sorry, not yet!

Do I need two different varieties to get fruit? No, tayberries are self-fruitful.

Will I get fruit the first year? No, you can expect fruit two years after planting, with full fruiting in three years.

How many harvests per year will I get? Tayberries will produce fruit once per year.

Is the tayberry the same as the loganberry? A tayberry is a cross between a blackberry and a raspberry. It has thorny trailing canes. Even though they are from a similar cross, the teaberry is sweeter and much juicier than the loganberry.