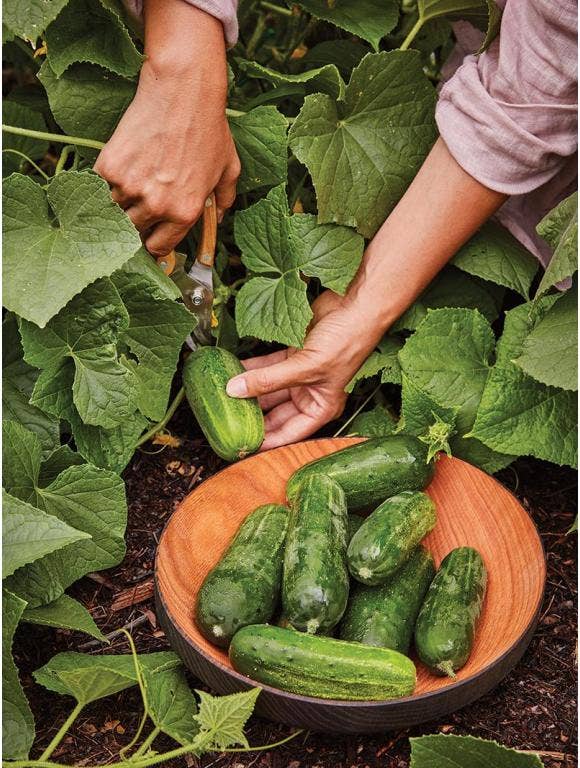 Posted in: Gardens by Type, Get Started, Gardening 101: How to Begin, Vegetable Gardening

Can I Grow Cucumbers?

No summer garden is complete without cucumbers. They are very easy to grow and are very prolific. Planted in a section of the garden that receives full sun and has an evenly moist, fertile soil, success in growing cucumbers is almost guaranteed.

Like other summer vine crops, cucumbers are heavy feeders and demand a steady supply of water. Work plenty of organic matter (compost, well-rotted manure) into the soil before planting to help it retain moisture and to provide the nutrients the cucumber plants will need throughout the season. A soil pH of 6.8 or higher is preferred.
If space is limited, cucumbers will do just fine on a patio or deck if it receives full sun. Bush cucumber varieties like 'Sald Bush',' 'Bush Champion' and 'Picklebush' can be grown in containers. A five-gallon or larger pot can easily support one or two plants and provide fresh cukes all summer long!

Although the cucumber (Cucumis sativus) is thought to have originated in northwest India where it has been cultivated for more than 3,000 years, the wild ancestors of the fruit have been a part of the human diet since almost the origin of man. Excavations near Thailand revealed cucumbers were eaten as early as 9750 BC. Pickling was certainly invented early as well. By the time of the Pharaohs, Egyptians ate brined cukes at nearly every meal. In the Bible, the Israelites in the wilderness complained to Moses that they missed the cucumbers they had enjoyed in Egypt.

Cucumbers reached Europe early in its history as well. They were much prized by the ancient Greeks and Romans. According to Pliny, Emperor Tiberius demanded fresh cucumbers daily on his dining table. Documents record Columbus brought the fruits to the New World and that cucumbers were popular with our early settlers. By the 18th century, cucumbers were commonly grown all over the globe.

Is Cucumber a Fruit or a Vegetable?

In a supreme court case in 1983 (Nix vs hedden), it was deemed that cucumber was to be legally categorized and taxed as a vegetable. The supreme court made this decision based on the usage of cucumbers, which was similar to that of vegetables such as: carrots, potatoes, parsnips, cauliflowers, cabbage, lettuce, beets, and celery.

But is it really a vegetable, or is cucumber a fruit? Cucumbers fit the typical definition of a fruit meaning that they develop when the flower is fertilized and also contain the seeds of the plant. Cucumbers are even part of the same genus (cucumus) as Cantaloupes which are definitely a fruit. However, according the supreme court in 1983, tomatoes, cucumbers, and other "fruits of the vine" that are grown in kitchen gardens and used in main courses in meals, rather than in desserts as fruit are, are to be considered vegetables.

Should I Grow Cucumber Seeds Or Plants?

Like other cucurbits, cucumbers don't like to have their roots disturbed and can be tricky to transplant. However, if you want an early start on the season, it's worth the risk to start a few cucumber plants indoors in peat pots about two or three weeks before setting out. Because cucumbers are easily injured by frost, planting should be delayed until the soil temperature reaches 60 degrees and all danger of frost is past. This is often at least two weeks after the last frost date.

The preferred method of cucumber planting is direct seeding in the garden after the soil has warmed as the seeds will not germinate in a soil chillier than 60 degrees. Just push two or three cucumber seeds an inch into the soil, spacing the plantings 18 to 36 inches apart. (Bush varieties will tolerate a closer spacing.) If the soil is moist and warm, the seedlings will pop out of the ground in a matter of days.

How To Cultivate Cucumber

Cucumbers really don't need much attention once established in the garden. Here are three tips to ensure a great harvest.

Add cukes as succession plantings. Because cucumbers crave heat, they can follow cool spring crops of peas, spinach, and lettuce.

Provide steady moisture. A continuous water supply is necessary for the best quality fruits. A drip irrigation system is ideal in the cucumber patch. If this is not possible, water deeply once a week, applying at least one inch of water. Frequent but shallow watering will reduce overall yields.

Feed cucumbers well. Cucumbers, like other cucurbits (squash, melons, and pumpkins), are heavy feeders. If organic matter was incorporated into the soil prior to planting, fertilizer will not be needed early in the season. However, when the cucumber plants begin to blossom and set fruit, a side dressing of balanced soluble fertilizer will help keep the plants in production. 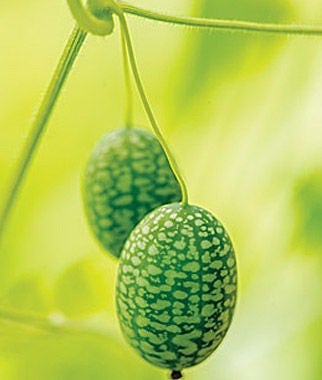 To improve overall cucumber production, consider using the following two techniques. Use black or brown plastic mulch. Because a warm, moist soil is essential for top production, use dark plastic mulch on the cucumber bed. This will speed up growth and increase yields by conserving soil moisture and maintaining a high soil temperature. The mulch will also keep weeds at bay.

Think vertical! When planning the garden, consider growing vining cucumber varieties like 'Sweet Success' and 'Tasty Green' vertically on a trellis, fence, or other support. This makes the best use of garden space by containing the vines and keeping them from sprawling throughout the garden, as well as keeping the fruits clean and straight as they develop above the ground. Researchers have proven that growing cucumbers vertically dramatically increases yields because the vines receive better air circulation and more sunlight than vines on the ground.

The major insect pests that attack cucumbers include cucumber beetles, aphids, and spider mites. Cucumber beetles can cause the most damage, particularly to seedlings, and carry wilt disease from plant to plant. A floating row cover placed immediately over emerging or transplanted seedlings will decrease cucumber beetle damage by keeping the moths from laying eggs on the plants. Be sure to remove the cover when cucumber plants blossom to allow pollination. Applications of pyrethrum or rotenone will also significantly reduce pest damage.

Cucumbers are susceptible to vine crop diseases including anthracnose, bacterial wilt, downy and powdery mildews, mosaic, and scab disease. Most hybrids today have great disease tolerance. If you do have problems with diseases in your cucumber patch, next year select only disease-resistant types. Also, be sure to keep the area around the cucumber bed clear of plant debris and refrain from working in the patch when the leaves are wet and more susceptible to fungal and bacterial diseases.

Like most vegetables, cucumbers are tender and tastiest when harvested young before their seeds are fully developed. Slicing cucumber varieties are generally ready for harvest when about six to eight inches long; pickling types at three to five inches. Don't allow the fruits to become overripe on the vine as this signals to the plant that the seed-development process is nearly complete and it will shut down. Keep mature fruits picked to encourage further production. Harvest the fruits early in the morning before the sun hits the cucumbers for the best flavor and texture.

About 30-40 days before the first expected frost in your zone pinch off all the blossoms on the cucumber plants. This will encourage the plants to bring the remaining fruits on the vines to maturity before the frost kills them. 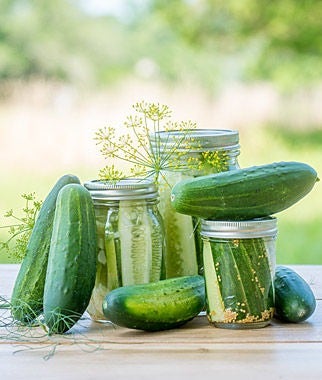 Personally, I think cucumbers are at their best served raw, sliced or grated into salads, dressed with yogurt or sour cream, or simply eaten whole. Wash and trim the cukes, then cut into spears, slice, or grate just before final preparation. There is no need to peel homegrown cukes (taste and nutritional value suffer) unless the recipe requires peeling. On a hot summer day, there's nothing like a cold cucumber salad - whether it's German with sour cream, chopped chives, and a sprinkling of paprika or Oriental with raisins, black olives, and chopped water chestnuts.

You can even cook cucumbers in a variety of ways if you're feeling adventurous in the kitchen! Try adding diced cukes to soup, or sauté slices in butter and serve with fresh dill or mint.

Unfortunately, cucumbers don't store well because of their high water content. The fruits will keep for up to a week in the vegetable crisper of the refrigerator. For the enormous surplus many of us have in midsummer, pickling cucumbers is the only way to go. Get out your favorite pickling recipes (sweet, sour, sweet and sour) and put up as many as you can store. That way, you can enjoy homegrown cukes throughout the winter and quite possibly into next spring.