Daffodils are the darlings of spring. They're easy, elegant, early-blooming flowers, capable of warming a gardener's heart while the weather outside is still chilly. They're old-fashioned flowers with lots of modern style, and they fit into gardens of every size and description. Fall is the time to plant them. For gardeners who have to deal with deer, this is a flower you can safely indulge in: deer won't touch daffodils.

Most gardeners know yellow daffodils best, but there are thousands of daffodil cultivars. "I have made it a goal to prove to the public that daffodils are not just yellow," says Jason Delaney, curator of the bulb collection at Missouri Botanical Garden in St. Louis, "I'm trying to get as many different kinds as I can possibly squeeze in." At a recent count, the garden's sweeping bulb beds were planted with almost 600 different daffodil cultivars, all labeled, so visitors can compare and take notes.

Daffodils from all but one of the 13 official divisions of the genus Narcissus are represented in the collection. (The divisions are based on the form and size of the bloom.) Delaney's favorites are frilly Division 11 daffodils, whose blooms have split coronas (the trumpet portion of the flower).

"Some of them are amazing," Delaney says. "The colors are really intense, especially in the pinks." Delaney hybridizes daffodils and exhibits them at flower shows every spring, but he still gets a thrill from everyday daffodils. These sturdy flowers stand up to the challenges of spring, he says; they can take the disheartening late freezes that test the hardiness of even the toughest gardener.

Daffodils are also great perennializers, coming back every spring for years. In some old gardens, big clumps of daffodils are the living legacy of the gardeners who planted them years ago.

In St. Louis, the daffodil season begins in mid-March, peaks in early April, and keeps running through about the first of May. Daffodils are planted mostly in drifts in large beds, but they can also be seen in perennial flower beds and among annual pansies of every hue. Big yellow trumpets like 'Dutch Master' and 'February Gold' bloom first. 'Fortissimo', 'Ceylon', and 'Jetfire', daffodils with showy orange trumpets, are right behind them, followed by bicolors like 'Professor Einstein' (which has white petals and an orange trumpet). At the very end of the daffodil season, the fluttering, snow-white petals and tiny red-rimmed corolla of 'Pheasant's Eye' and other poeticus daffodils have a charm all their own, and then the summer is upon you. The daffodils will be back next year. 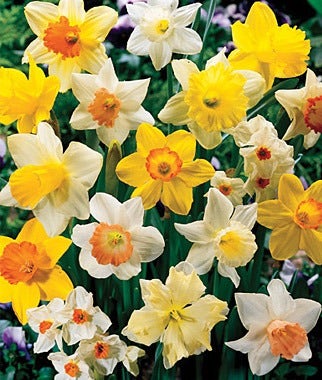