Browse By Topic:
Posted in: Advice by Class: Herbs Gardening by Season

Since it is the leaves of most herbs that are used for seasoning, there isn't as much concern over the shortness of the frost-free season, since all plants can manage some vegetative growth. However, herbs that survive long and cold winters and regrow in the spring are certainly timesavers and often produce harvestable growth before annual herbs are even planted.

Chives, mint, and lovage are three perennial herbs that thrive in short season climates. Mint grows so easily that some regard it as an invasive pest. It is best to confine it to containers. You may not be familiar with lovage; it adds a celery flavor, but without the crunch.

Some perennial herbs are not winter-hardy in the coldest climates, but keep in mind that many plants will winter over successfully in very freely draining soil when they would die in soggy clay. Try herbs such as sage, tarragon, thyme and oregano in gritty, freely draining soil before deciding they won't make it through your winters. Many are considered hardy to zone 4, but only with suitable drainage.

Rosemary and bay are two common herbs that are perennial in warmer climates but not further north. They grow well in containers and can be brought indoors and grown as houseplants in the winter. You will need to re-acclimate them to outdoors in the spring, in the same fashion that you harden off your transplants.

Parsley and dill thrive in short season gardens. Soak parsley seed overnight before sowing to speed germination. Parsley is the most cold tolerant herb. You will be able to harvest it until it is buried in snow. Try sowing dill several times during the garden season in order to have both leaves and seeds ready for salads and pickles. Borage, chervil, fennel and salad burnet are less common herbs that do well in short season gardens. Why not try them in your garden?

Basil is the least cold tolerant herb but is still well worth growing for its delicious flavor. Not only does it blacken at the slightest hint of frost, but it stops growing well if night temperatures drop into the 40s(F). Some gardeners have success bringing established plants indoors for the winter; check plants carefully for pests before potting them up, and place in a very bright window.

While most herbs can be started from seeds or from plants, rosemary and tarragon are far superior when grown from plants. Make sure you purchase French tarragon and not Russian tarragon. 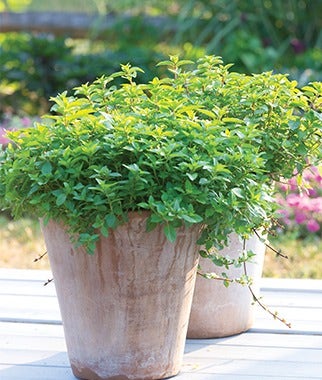