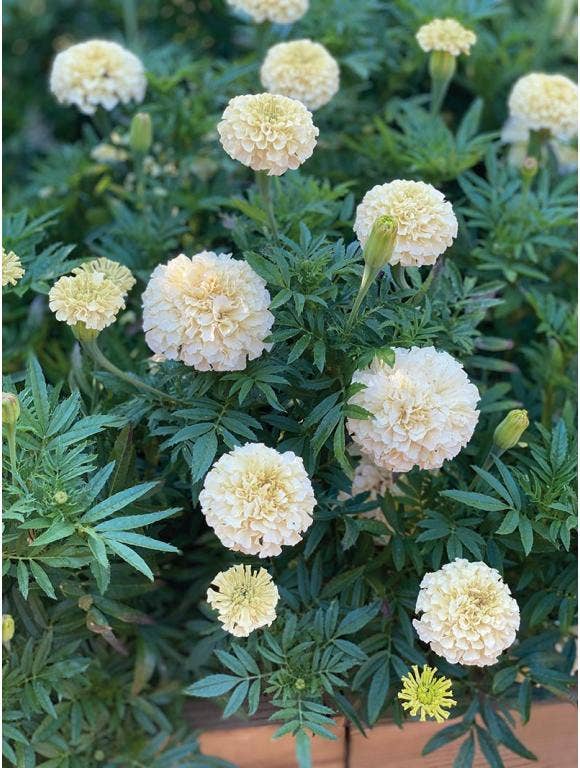 Marigolds, native to the New World and sacred flowers of the Aztecs, journeyed across the Atlantic Ocean twice to travel 3,000 miles north of their center of origin. The lengthy journey is a testimony to the rugged durability of marigolds. Today the marigold is one of the most popular annuals grown in North American gardens.

The earliest use of marigolds was by the Aztec people who attributed magical, religious and medicinal properties to marigolds. The first recorded use of marigolds is in the De La Crus-Badiano Aztec Herbal of 1552. The Herbal records the use of marigolds for treatment of hiccups, being struck by lightening, or "for one who wishes to cross a river or water safely". The last use confirms the magical properties ascribed to marigolds.
The Aztecs bred the marigold for increasingly large blooms. It is told that in the 1500's, native marigold seeds were taken from the Aztecs by early Spanish explorers to Spain. The marigolds were cultivated in Spain and grown in monastery gardens.
From Spain, marigold seeds were transported to France and northern Africa. The taller marigolds, now called African-American, became naturalized in North Africa.
In Mexico and Latin America, marigold flowers are used to decorate household altars to celebrate All Saints Day and All Souls Day. Flower heads are scattered on relatives’ graves which can account for the profusion of marigolds in cemeteries.
Marigolds are also used in Hindu religious ceremonies. An account describes the marigold being used as garlands to decorate village gods during the harvest festival. The traveler recalling the festival also noted that maize and peppers were exactly the same shade of orange-yellow as the marigold. It was as though the corn and peppers were selected or bred to match the marigold flower color.
Several hundred years after their initial journey from the Americas to Europe and Africa, marigolds were introduced to American gardeners. This reunion of sorts did not happen until shortly after the Revolutionary War. Marigolds were just one of many plants shipped to the young country.
Around the turn of this century, sweet peas and asters were the popular flowers in the United States. Yet both of them were becoming beleaguered by disease and declining overall performance. The time was right for a new flower to make its debut. In 1915 David Burpee took over the seed company which was founded by his father, W. Atlee Burpee. Young David felt that marigolds held promise and decided to feature them in his catalog and fund research.
Since the 1920 s marigold breeding has developed hundreds of new varieties. The odorless marigolds, white marigolds, hybrids and triploids have all been advancements in breeding. Somehow it seems fitting that the marigold would find the breeding emphasis and popularity back in the Americas, its center of origin.