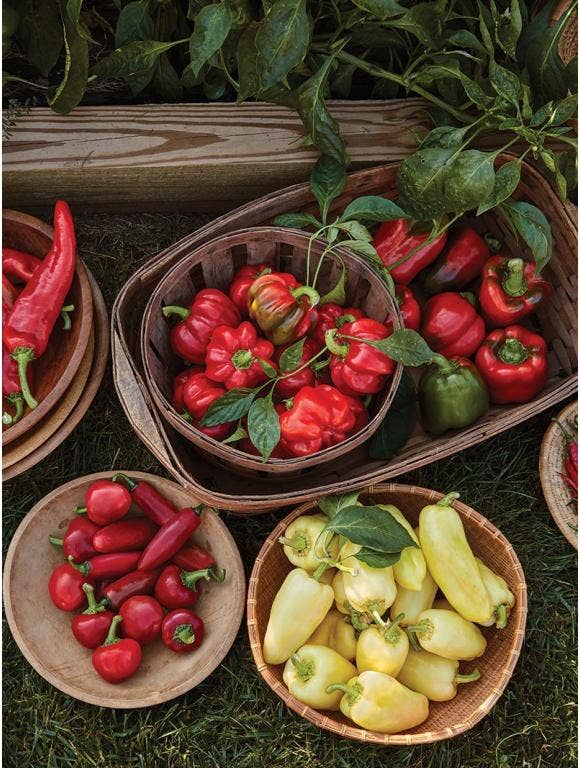 CAN I GROW PEPPERS?

Peppers are a breeze to grow. Basically, you plant them and watch them take off! But, for maximum production, a little pampering helps. Plant peppers in a bed that receives full sun. Provide a sandy loam soil that drains well and contains plenty of organic matter. Depending on the size of the pepper varieties planted, spacing should be 12-18 inches apart. Peppers can double as ornamentals, so tuck some into flowerbeds and borders. Most sweet peppers mature in 60-90 days; hot peppers can take up to 150 days. Keep in mind, however, that the number of days to maturity stated on the seed packet refers to the days after transplanting until the plant produces a full-sized fruit. You must add 8-10 weeks for the time between sowing and transplanting which means most of us will be starting pepper plants indoors in January or February!

Peppers were grown extensively in Central and South America, Mexico, and the West Indies long before birth of Christ. But it was Columbus and other early explorers who introduced peppers to a welcoming European market. In fact, the pepper is a major New World contribution to the cuisine of the Old World. The Europeans became so fond of peppers, they carried them throughout the known world.

By the 17th century, peppers were cultivated not only in Europe, but in much of Asia and Africa.

Only gardeners who enjoy long growing seasons in the Deep South should attempt to sow pepper seed directly in the garden. Most of us must start our own plants indoors about 8-10 weeks before transplanting, which should be done 2-3 weeks after the expected last frost.

Most pepper seeds sprout in about a week at a temperature of 70-80 degrees F., but germination can be spotty depending on variety. Hot peppers can be very finicky. To speed the process, place the seeds between damp sheets of paper towel, put them in zippered plastic bag, and put the bag in a warm place (the top of the refrigerator works fine). As soon as the pepper seeds sprout, carefully plant them in individual containers such as pea pots. When the first true leaves develop, move the plants to a sunny southern window until you can transplant them into the garden. Don't set out your pepper transplants until night temperatures average around 55-60 degrees F.
If you'd rather not start seedlings, you can order plants from Burpee which will arrive shortly before transplanting time or purchase peppers at a local garden center. However, choice of varieties is generally very limited.
________________________________________

Here are two key cultivation tips to keep in mind.

Water in moderation.
Peppers are thirsty plants! They need a moderate supply of water from the moment they sprout until the end of the season. However, peppers won't tolerate a saturated soil that waterlogs their roots. The soil must drain well, yet hold enough moisture to keep the plants in production. To maintain a proper balance, before transplanting, work some organic matter into the soil to enhance moisture retention. Use mulch to prevent excessive evaporation from the soil during the dry summer months.

Don't overfertilize.
This tends to make the pepper plants develop lush foliage at the expense of fruit production. Peppers are light feeders. If you work 5-10-10 fertilizer into the soil prior to transplanting, that's probably sufficient. You can also side-dress the plants with a light sprinkling of 5-10-10 when blossoming starts, just to give them a boost if needed.
________________________________________

Plastic Mulch.
To get an early start with your peppers, particularly in the North, cover the prepared bed with a dark colored polyethylene mulch at least a week before transplanting. This will heat the soil beneath and provide a better growing condition for young pepper plants. The mulch will also help the soil retain moisture throughout the season as the plants grow.

Companion Planting.
If you practice this technique, try planting peppers near tomatoes, parsley, basil, and carrots. Don't plant peppers near fennel or kohlrabi.

Generally, peppers are problem-free. The same pests and diseases that plague other members of the Nightshade family (tomatoes, potatoes, and eggplants), however, will occasionally attack peppers. With a few precautions, you can keep your peppers "clean."
Use organic pesticides to eliminate common pests. Destructive caterpillars like cutworms, tomato hornworms, and borers are easily controlled with Bacillus thuringensis (BT or Thuricide). Rotenone and pyrethrum will readily handle pepper maggots and weevils, leaf miners, flea beetles, and aphids.

Plant disease-resistant pepper varieties, especially if anthracnose, mosaic, and bacterial spot are a problem in your area. (Ask veteran gardeners in your neighborhood or the County Extension agent.)

Avoid working in the garden after a rain. Diseases can spread rapidly among wet pepper plants.

Like cucumbers and summer squash, peppers are usually harvested at an immature stage. The traditional bell pepper, for example, is harvested green, even though most varieties will mature red, orange, or yellow. Peppers can be harvested at any stage of growth, but their flavor doesn't fully develop until maturity. This creates a dilemma for the home gardener.

Frequent harvesting increases yields, often at the sacrifice of flavor. If you continually pick the peppers before they mature, the plants will continue to produce fruit in their quest to develop viable seed.

Allowing fruits to fully ripen enhances flavor, often at the sacrifice of yields. Plus, you will have to wait until late in the season before harvesting table-ready peppers.
To avoid this dilemma, and if you have enough garden space, plant at least two of each pepper variety you've selected. Allow one plant of each variety to fully ripen to maturity, and harvest the other throughout the season. Also, when picking peppers, refrain from tugging on the fruit, which may break off a branch or even uproot the entire plant. Use a sharp knife or garden shears to cut the tough stem.

For maximum flavor, eat peppers on the same day they are picked. You can also leave them on a kitchen counter for a day or two to ripen further. Do not place peppers in the crisper drawer or in plastic wrap or bags in the refrigerator. Peppers are warm-weather fruits and do not store well in cold temperatures. If you have too many peppers, consider the following storage options.

Freezing.
This is the easiest storage method, but the peppers will be soft when thawed. The flavor is retained, however, so use frozen peppers primarily for adding 'spice' to soups, stews, and sauces. If you stuff the peppers before freezing, you'll have a ready-made dinner, perfect for the microwave.

Pickling.
Peppers can also be preserved by canning them, but they're low-acid fruits and thus require canning under pressure. It's easier to pickle peppers as you would cucumbers in a crock filled with a simple brine of four cups of water, four cups of vinegar, and 1/2 cup of pickling salt. Add a clove or two of garlic and some fresh herbs for added flavor.

Drying.
This method works best with the thin-walled hot peppers, particularly the smaller varieties that can be dried whole right on the plant. The key to drying peppers is doing it slowly to retain their color and flavors.