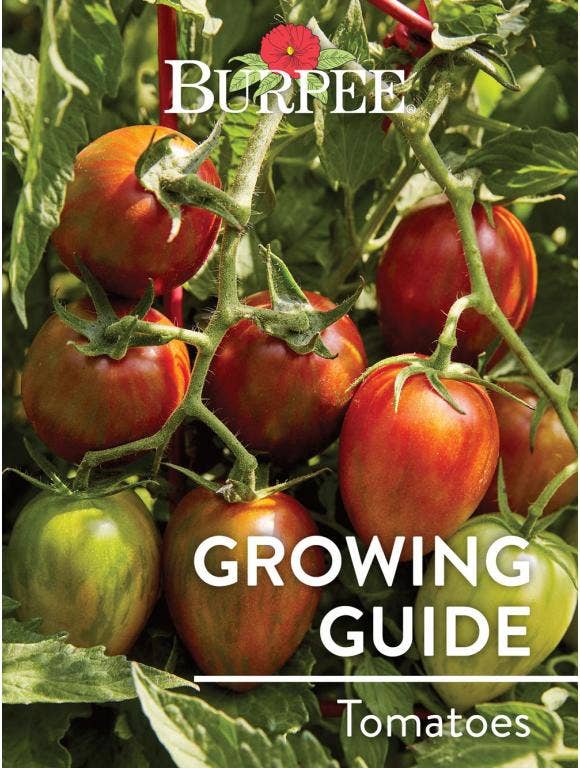 How to Sow and Plant

Anthracnose: This is a fungus disease that attacks the fruit as it is ripening. The first visible sign is a circular spot on the skin that is slightly sunken. The spots enlarge and turn black; the fruit rots. Extended periods of heat and humidity facilitate anthracnose growth. The fungus overwinters in diseased plant debris. Burpee Recommends: Plant resistant varieties, provide sufficient space between plants for good air circulation, avoid overhead watering which can spread the fungus spores, keep a clean garden, remove and discard all diseased plant material and rotate crops. Use a mulch to prevent spores from splashing from the soil onto plants.

Blight: Early Blight is a very common disease which causes brown concentric rings to appear on the lower leaves. The spots coalesce; the leaf turns brown and may drop off the stem. Leaf drop moves up the stem. Fruit does not grow to full size and is left exposed to possible sunburn/sunscald. This fungus overwinters in plant debris and weeds. Late Blight is another fungus disease that causes defoliation and fruit rot. Greasy, greenish-black, water soaked spots appear on the lower leaves. The spots enlarge and if the weather is wet they will look mildewed. Fruits develop dark rough spots. Rainy or cloudy days with temperatures of 70-80 degrees F and nights at 40- 60 degrees F provide ideal conditions for the rapid growth of this fungus. It is retarded by hot dry weather. The fungus is air-borne and can spread from diseased plants growing nearby. Burpee Recommends: Practice good garden hygiene at the end of the season and discard, do not compost, possibly diseased plants. Space plants to allow for adequate air circulation. Avoid overhead watering which may spread fungus spores. Plant in at least a 3 year rotation, do not alternate with plants in the same family (potatoes, peppers or eggplants). Plant resistant varieties such as ‘Cloudy Day’.

Septoria Leaf Spot: This disease causes severe losses in the Atlantic and Central states. It is most severe during rainy seasons in closely planted gardens. It usually appears when the plants begin to set fruit. Circular spots with gray centers and dark margins appear on the lower older leaves. Fungus spores are produced and darken the center of the spots. There is a progressive loss of foliage and fruits suffer from sunscald.  Burpee Recommends: Remove and destroy Infected plant debris. Don't handle or brush against plants when they are wet. Rotate plantings. Remove weeds growing nearby.

Wilt Diseases: Bacterial wilt is evidenced by rapid wilting and the death of the plant caused by soil-borne bacteria. There is no forewarning of yellow or spotted leaves. When the affected stem is cut near the soil line, the area is dark and oozes a gray slime. The wilt does not attack the fruit. The bacteria live in the soil and enter the plant through the roots. Control Measures: Do not grow plants in the same family in that area or nearby for 4 or 5 years. Continue to apply generous amounts of healthy compost to soil while fallow or support other crops. Fusarium wilt is one of the most damaging tomato diseases because of its spread during periods of hot weather. The first symptom of fusarium is the appearance of a few yellow leaves or a slight drooping of the lower leaves. Caused by a soil-borne fungus, the fungus enters through the roots and passes up into the stem producing toxic substances. This fungus is similar to verticillium wilt but will affect first one side of the plant and then the other. Burpee Recommends: Destroy affected plants at the first sign of fusarium; rotate crops and plant resistant varieties. Verticillium wilt causes a wilting of the leaves and stems on several branches. Leaf margins cup upward, leaves turn yellow and drop off. If fruit is produced, it is usually smaller than normal. Like fusarium this will enter through the roots, migrating up the stem and plugging a plant's transport vessels. It is transmitted in the soil. It can also be spread by water and tools. Burpee Recommends: Practice at least a 4 year crop rotation. Remove and burn crop debris. Plant resistant varieties. Walnut wilt causes overall wilting of plants, or dwarfed growth, in close proximity to black walnut tree. Some or all plants in a planting may be affected. Burpee Recommends: Do not plant tomatoes near black walnut trees. These trees exude a toxin from their roots which kills many plants.

Virus (Various causes): The most characteristic sign of virus is tight and dark green mottling of the leaves. Young leaves may be bunched. Young plants may have a yellowish tone and become stunted. Fruit is usually not affected in outward appearance, but it may be smaller and scarcer. Leaflets may point upward and have a grayish cast. Burpee Recommends: Plant resistant varieties. This disease is readily spread by handling. Destroy diseased plants and the plants on either side. Never smoke in the garden as tobacco mosaic virus can be transmitted from a smoker's unwashed hands while handling plants.

Blossom End Rot (BER): Blossom End Rot causes large brown or black dry or sunken spot(s) to appear, usually starting at blossom end (opposite the stem) of the fruit. Fruits often ripen prematurely. BER occurs when a plant cannot metabolize the calcium it needs to develop properly. This can occur when there is not enough calcium in the soil or when root damage and water stress reduce the uptake and movement of calcium through a plant. Occasionally, BER is the result of excessive nitrogen fertilization. It only takes a day for a lack of calcium to affect fruit, and that day can occur any time after blossom set.

Fruit Cracking: This indicates that when the fruit was forming, it did not get an even supply of moisture from the roots. A sudden rush of water from sudden and heavy summer rains through the stem can pop the skin of a ripening fruit like an overfilled water balloon. The condition is particularly pronounced after a drought when a summer storm delivers a great amount of water to the tissues in the fruit. The skin cannot expand fast enough and cracks appear. The crack may rupture allowing the entrance of blight and rot. Burpee Recommends: Take care with your watering: instead of a quick sprinkle every day, water deeply once or twice a week (depending on rainfall) so the moisture soaks deeply into the soil where roots can take it up as needed. Soaker hoses can help here. Stick your finger into the soil every day to check that it is evenly moist a couple of inches below the surface. Always mulch tomatoes to keep moisture from evaporating, even in containers.

Nematodes: Microscopic worm-like pests that cause swellings (galls) to form on roots. Plants may wilt or appear stunted. This is a serious problem in many Southern states. Burpee Recommends: Do not plant into infested soil. Grow resistant varieties. Try planting ‘Nema-Gone’ marigolds around your plants.

Tomato Horn Worm: Large, green caterpillars can quickly devour foliage. Burpee Recommends: With sturdy gloves on, hand pick them. If you see white projections coming from the back of the caterpillar, do not destroy it. These are the egg cases of a parasitic wasp that will destroy the caterpillar. These wasps should be allowed to remain in your garden.

Why do I have lots of leaves but no flowers? The plant is likely getting too much nitrogen, which triggers it to grow foliage, and not enough phosphorus, which favors flowering and fruiting. Choose a fertilizer that has a balanced ratio of the three major elements, such as 10-10-10, or where the middle number (phosphorus) is larger than the first number (nitrogen) such as 2-3-1. Tomatoes are heavy feeders and usually do need fertilizer unless your soil is very rich. But follow manufacturer's directions to avoid overdoing it.

Why are my fruits malformed? There are multiple causes for deformities but the two most common are catfacing and cracking. All are cosmetic only, the fruits are still edible. No tomato crop will ever be perfect. A certain amount of imperfection and loss is normal, though some years are tougher on tomatoes than others. However, many diseases and cultural reasons for misshapen tomatoes can be prevented. Properly choose, plant and care for your tomatoes; and let last year's challenge inform how you grow this year and this year's challenges inform how you grow next year. Bear in mind, too, that many older varieties prized for their flavor, such as 'Brandywine', are normally not perfectly red and round.

How do I grow tomatoes in a really hot climate? Tomatoes perform best when temperatures are between 50 and 90 degrees F. In warmer climates tomatoes cannot be grown in the heat of summer. Gardeners there grow them during their mild winters. Some varieties are more heat resistant than others: Arkansas Traveler; Heatwave II Hybrid; and Tasti-Lee.

Something is eating my tomatoes?!  Squirrels, skunks, possums, voles, birds and other small animals like tomatoes as much as people do. The only real way to protect a tomato crop is with a physical barrier such as a sturdy chicken wire or tomato cages. To be safe from diseases, discard animal-sampled tomatoes.