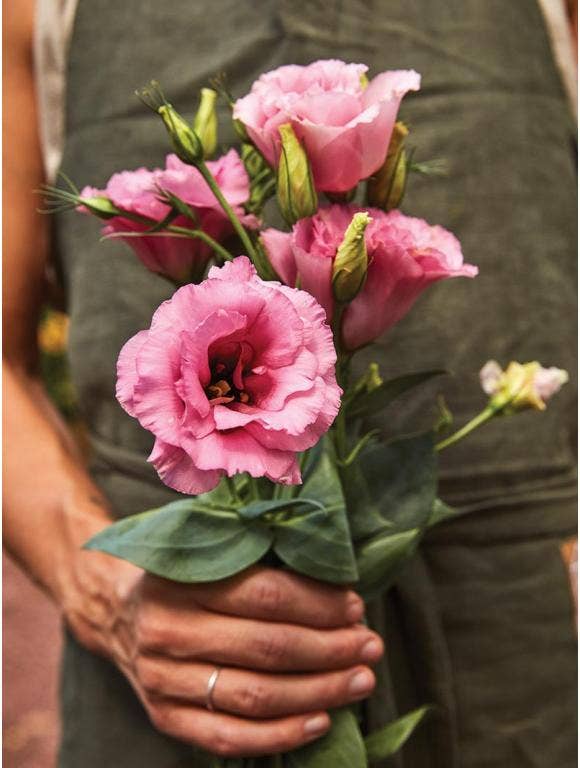 When preparing to make a cut flower bouquet, be certain that the plant material is in good condition. Use flowers that have just opened, and include buds, and attractive foliage, as well. Flowers should be picked early in the morning or in the evening. Stems are apt to wilt quickly if cut in mid day when the plants lose the most water.

Whenever possible cut the flowers just above a side branch on which another flower is forming. Make the cut with a clean, sharp knife or shears. Try not to crush or bruise the stems. Strip off some of the leaves and plunge the stems in warm water as quickly as possible. Most people make the mistake of using cold water - thinking this will freshen the flowers. The life processes within plants, as in other living things, are stimulated by warmth and slowed down by cold. Since it is critical for the flowers to take up water after they’ve been cut, it follows that they should be placed in warm rather than cold water.

Florists put new shipments of flowers in vases of 100-110°F water and then put the vases in a cool place until the stems have become completely filled with moisture. The combination of warm water around the stems and cool air around the tops seems to do the trick.

Take a wide-mouthed vase or bucket of warm water with you to the cutting garden and plunge each stem into it the instant you cut it. When the container is full but not crowded, let it stand in the coolest part of your house.

After the flowers are sufficiently conditioned by the warm water and cool air treatment, this usually takes about two hours, they are ready for arranging. Strip off any leaves that would fall below the water line in the arrangement. If left on, they will decompose and create unpleasant odor and also foul the water with bacteria, clogging the flower’s water-conducting apparatus and hastening its death.

Stems should also be trimmed at this point. Many tests have been made to determine whether stems should be cut straight across or on a slant, with a knife or with shears. These factors have no bearing upon the life of the flowers. Squeezing stems may compress some of the cells and restrict the easy intake of moisture, and for that reason most florists use a sharp knife or a keen two-bladed pair of shears rather than the blade-and-anvil type of clipper.

Most commercial preservatives do help flowers. Along with quick energy sugar, they also provide other useful substances; a bacteria-inhibiting material to control the spread of those organisms that clog the ends of the stems; an acidic material to lower the alkalinity of the water and to reduce the growth of microorganisms; metallic salts to maintain color in the petals; and respiratory inhibitors to cut down the flower’s metabolic rate. Under the best of circumstances these preparations can double a cut flower’s life. If you want to use them, begin to use them as soon as the flowers are cut; put the preservative into the vase or pail of water you carry to the garden.

Nothing helps keep cut flowers fresh better than a scrupulously clean environment. Make sure the container you use is free of any dirt left from a previous flower arrangement, and give the flowers fresh water at 100-110°F, not cold, every day. If you have time, remove the flowers entirely and refill the container. If a preservative is used, it is not necessary to change the water; simply add fresh warm water daily to replace that used by the flowers. Cut flowers will also last longer if they are kept out of drafts and strong sunlight, both of which speed up the transpiration process.