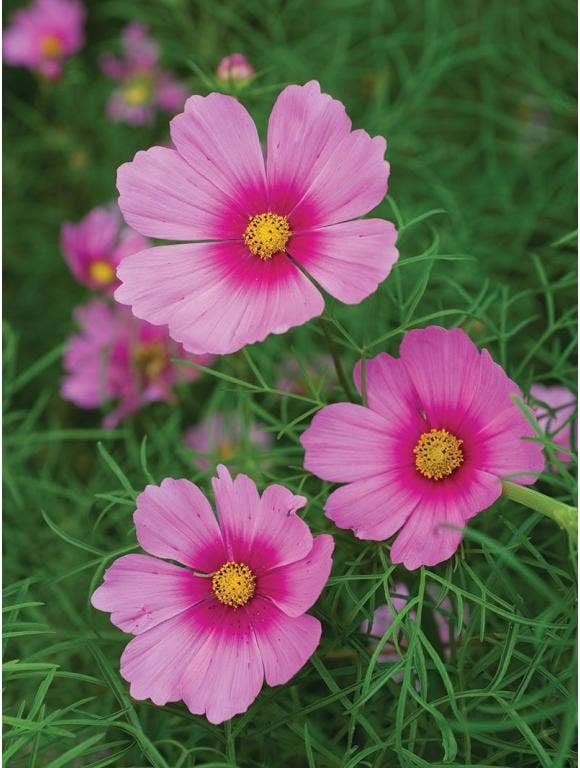 Can I Grow Cosmos?

Cosmos are prized for their abundant, silky, daisylike flowers and their unflappable, easy-care nature in the garden. While bedding plants are sold in spring, cosmos are simple and inexpensive to grow from seeds. Plant them in full sun (in very hot regions, cosmos can take afternoon shade) and give them protection from strong winds. Cosmos tolerates a wide range of soil types, including poor soil. Plants need even moisture to get started, but mature cosmos are drought tolerant; plants produce more and larger flowers, however, if they are watered regularly.

What is the History of Cosmos Flower

Cosmos, in its annual form, is a native of Mexico. Along with taking gold, silver, and other riches from Mexico, 16th-century Spanish explorers sent hundreds of cosmos back to Madrid. Cosmos wasn’t collected until the late 1700s, however, and the flower made its way to England in 1789, thanks to the Marchioness of Bute, wife of the English ambassador to Spain.

It was at least another 50 years until cosmos got to the United States, indirectly from England and Spain and more directly from Mexico. This late start in British and American gardens probably accounts for the plant having no widely used common name, answering instead to its genus name, Cosmos, which comes from the Greek word kosmos, meaning “beautiful.” Cosmos is a member of the aster family.

Should I Grow Cosmos Seeds or Plants?

Either sow cosmos seeds outdoors after danger of frost has passed, or for an early start on summer blooms, sow seeds indoors four to five weeks before the last spring-frost date. Plant cosmos in full sun and protect them from strong winds. Space plants approximately 2 feet apart; with tall cosmos, space plants closer than the recommended 2 feet and let them support each other. Both germination and growth are fast, but cosmos plants are frost tender, so don’t be in a rush. Cosmos are light sensitive and don’t bloom their best until late summer, when the days grow shorter.

How Do I Cultivate Cosmos Flower Plants?

Move these heat-loving annuals to the garden after danger of frost has passed and the soil has warmed. Cosmos need light soil with average to poor fertility that has a neutral or slightly alkaline pH and is well-drained. Soil that is too rich yields weak-stemmed, sparsely flowered plants that bloom late and flop over, so avoid soil that has been heavily amended, and don’t feed the plants. Tall cosmos sometimes require staking to prevent their thick, hollow stems from breaking due to heavy rain or wind. Instead of staking, a gardener may also space plants closer than the recommended 2 feet and have the plants support each other.

Pinch off spent flowers to encourage continuous bloom. Pinching stem tips can reduce height and encourage branching but isn’t necessary. Deadheading is recommended since it lengthens the bloom season. Cosmos plants that aren’t deadheaded will self-sow in warm regions. Typical plant height for cosmos is 1 to 5 feet.

Unlike many garden plants, pests and diseases rarely affect cosmos. This makes it much easier for gardeners to grow.

Cosmos are traditional cottage garden plants and perfect for all types of informal plantings. Use taller plants in the back of the border and to fill in around bunches of perennials such as lilies, irises, and ornamental grasses. They’re also stunning combined with annuals, such as cleome, and tender perennials like cannas and dahlias. Smaller or dwarf plants are ideal near the front of the border, in containers, or as edgings. You can also use cosmos as a fast-growing annual hedge or in a cutting garden; these plants make outstanding cut flowers, and all cosmos attract butterflies.