Browse By Topic:
Posted in: Cilantro 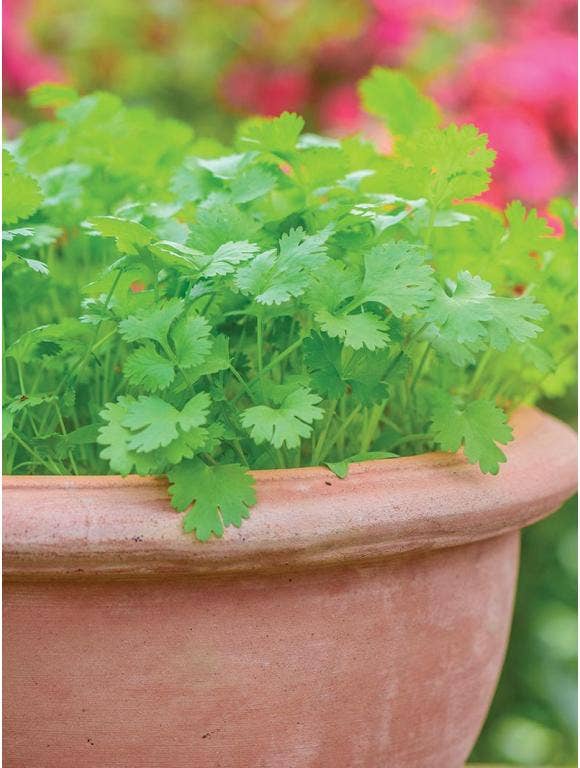 How to Grow Cilantro

Cilantro needs full sun or light shade in southern zones since it bolts quickly in hot weather. It grows best in a well-drained, moist soil. Cilantro plants should be spaced about 6 to 8 inches apart. To harvest fresh cilantro all season, make successive sowings every 2 to 3 weeks starting in late spring.

Cilantro, has been used for many centuries in the cooking of Mexico, India, Africa, Spain, Russia, China, many areas of Asia - especially Thailand, and the Middle East. It is thought to be native to North Africa or the Middle East. In addition to its many culinary uses, cilantro seeds were used medicinally, especially as a sleep and digestion aid.

Throughout most of North America, the stalks and leaves of the Coriandum Sativum plant are known as cilantro and the plant's dried seeds are called coriander. However, in different parts of the world, the plant is known as coriander & seeds called coriander seeds.

Should I Plant Cilantro Seeds or Plants?

Cilantro is best grown by directly sowing seed in the garden for two reasons. It grows so quickly it needs no head start indoors, and since cilantro develops a taproot, it doesn’t like being transplanted.

However, if you can’t wait to harvest some fresh cilantro leaves in late spring, about 2 weeks before the average last frost date start cilantro indoors in peat pots that can be directly transplanted into the garden. Seeds germinate in about 7 to 10 days.

Prepare soil by adding some compost or other organic matter to the planting area and working it into the soil to a depth of at least 18 inches. Rake the area smooth. Sow cilantro seeds 1/4-inch deep directly in the garden in late spring or early summer. Sow seeds or thin to 6 to 8 inches apart in rows spaced about 1 foot apart. Provide plenty of moisture and feed cilantro plants with a water-soluble fertilizer when they reach about 2 inches in height.

Since cilantro grows so quickly, it can also be sown again in the fall in warmer zones. For a steady supply of fresh leaves all summer, make successive sowings of cilantro seed every 2 to 3 weeks beginning in the spring.

When growing cilantro, the aim is to maximize foliage. Pinch back young cilantro plants an inch or so to encourage fuller, bushier plants. Snip off the top part of the main stem as soon as it appears to be developing flower buds or seedpods. Cutting off the flower heads redirects the cilantro plants’ energy back into leaf, and not flower or seed production.

Watch the plants carefully as the weather gets hotter. Cilantro has a short life cycle and bolts quickly (develops seed) in hot weather. Once cilantro sets seeds, the plant quickly starts to degrade.

If seeds are allowed to develop, you’ll notice how easily cilantro self-sows when you see delicate, lacy-leaf seedlings growing up around mature plants.

Cilantro rarely has serious problems with insects or diseases. In fact, probably due to cilantro’s strong scent, it is considered an insect repellant. Two diseases that could be a problem are leaf spot and powdery mildew. Leaf spot appears as small yellow spots that turn into larger brown spots. Excess moisture and poor air circulation most often cause the problem. Prevent leaf spot by making sure cilantro plants are grown in a well-drained soil, are not over watered, and are thinned out enough to allow good air circulation around them. 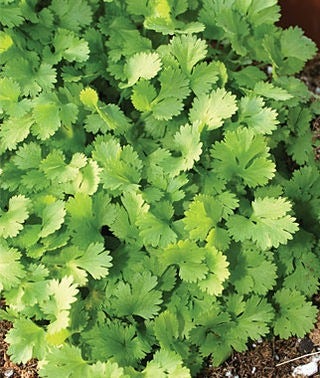 For Cilantro
The leaves can be cut at any time. Use the upper, new, finely cut leaves in cooking, but not the mature, lower ferny-type leaves. Cilantro is not normally saved and dried like other culinary herbs since, as stated, it loses almost its entire flavor when dried.

For Coriander
The large coriander seeds are easy to harvest and handle. Harvest on a dry day. Cut the top of the stems when the seedpods begin to turn brown and crack if pressed. Make sure pods are harvested before they release seeds into the garden. Once stems are cut, place seedpods in a paper bag so seeds will be caught. Finish the ripening process for a few weeks in a dark, well-ventilated, cool place. Pods can be shaken or rolled around in your hands to release the seeds.

If you’re growing the plant for seed, don’t bother fertilizing since that may delay flowering and thus seed production.

To have a taste of fresh cilantro after your plants are finished, make cilantro butter. It freezes well.

Cilantro butter is delicious on steamed vegetables and good with a little salt and lime juice on hot corn-on-the-cob. 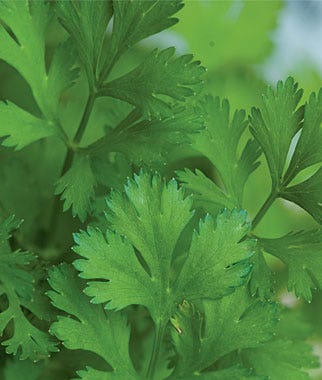