Tomato’s botanical name, Lycopersicon esculentum, translates to “edible wolf peach.” The French name for the tomato is “love apple.” Scientifically speaking the tomato is a fruit, but in culinary terms it is considered a vegetable. Native to South and Central America, the tomato was first recorded in Europe in the 16th century. For about 200 years, many feared tomatoes as poisonous — they were classified as a deadly nightshade. Today, health seekers eat tomatoes for the benefits of lycopene and vitamins A, C and B, plus potassium, folic acid, beta-carotene, iron and fiber. First seen in American farm journals in the mid-1800s, tomatoes were introduced to gardeners as “the latest craze,” though some writers dismissed tomatoes as “objects of pity.” Although historically tomatoes have sometimes been vilified, today there is consensus on their popularity— true champions in the American home garden. 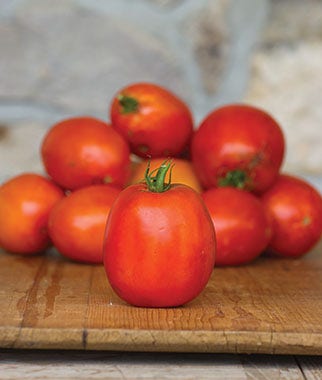