It’s a pleasure to make room in the garden for a crop that only has to be planted once. Rhubarb, grown for its tart-sweet leafstalks, is a perennial plant. Many gardeners know it as pie plant, but pies are just one use for the stalks: rhubarb jams and jellies are delicious, too. In a couple of seasons, it forms an impressive clump, and a good-sized plant will produce an impressive harvest for years to come.

Rhubarb is an extremely cold-tolerant plant, native to Siberia, but probably grown in American gardens since the late 1700s. It thrives in the midwest, where cold winter temperatures promote production of leaf buds. Gardeners may disagree on whether to call it a fruit or a vegetable, but in the midwest, at least, rhubarb has long been considered an essential kitchen-garden plant. Most rhubarb varieties, including ‘MacDonald’, have red stems; the stems of ‘Victoria’ and ‘Canada Red’ are pink and do not lend much color to a pie, although they taste delicious.

A mature rhubarb plant grows to about three feet wide and nearly as tall. It is most often grown from fist-sized roots, which are planted in early spring. The roots should be planted in well-drained soil in plenty of sun. Most experts recommend against harvesting leaf stalks the plant’s first year in the garden, to encourage healthy crown and root growth, and taking only a few stalks the second year. Once plants are established, production is prolific.

The first stems come up in early spring, once temperatures are consistently in the 40s. Harvest as long as plants are producing robust, crisp stems, which is often through the first wave of the strawberry harvest. This explains the popularity of strawberry-rhubarb pie: it’s the end of the rhubarb season, the beginning of strawberry time, and close to the heart of summer. 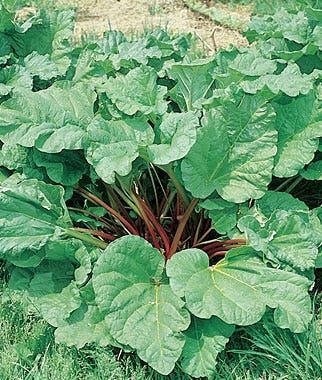