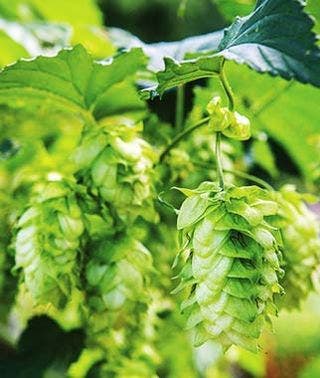 Hops are an essential ingredient in beer, but they are also a terrific shade vine for gardeners. Whether you make home brew or not, they are vigorous, reliable perennial vines. Hops are leafy and beautiful and cover a trellis thoroughly in the course of a summer. They die to the ground when frost comes, but can be relied upon to come back every spring.

How to Grow Hops

Growing hops is easy. They need well-worked soil in a sunny spot (with six to eight hours of sun). The rhizomes merely have to be planted with the growth tips facing up. Hops vines (also called bines) take off when the soil and air temperatures warm up in spring. Even their first year, the bines may grow 15 feet or more. Once they are established, they can grow up to 25 feet during the growing season, and produce up to two pounds of hops flowers. Home brewers train their hops up a sturdy pole, selecting three or four vigorous bines and pruning the rest off. If you are growing hops for shade, an arbor or pergola will support them easily.

The Mt. Hood Hop variety, which is prized for its hardiness, disease-resistance, and prolific production of aromatic flowers, was hybridized in the United States in the 1980s from traditional German Hallertau hops. It is well known in the Pacific Northwest, where hops are a tremendous commercial crop, but it grows well throughout the country and even thrives in warm climates. Among brewers, it is used for lager, pilsner, bock beer, wheat beer, and Munich-style Helles lager. One beer expert describes it as having a "clean but somewhat pungent and spicy aroma". The vines start to bloom in late summer, and the pale green flower clusters, called cones, hang gracefully from among the leaves, like decorative oregano flowers. They ripen in the sun and, after harvesting, the papery cones are dried. After the harvest, hops bines can be cut back to about three feet, or you can simply wait for frost to kill them, then cut them back, mulch over the top, and wait until next year. 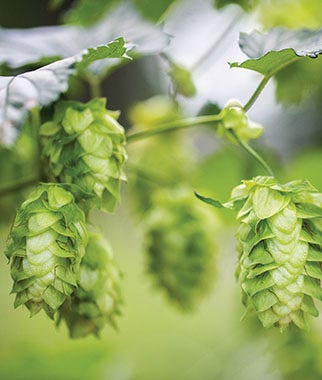