Cheers — when the drinks are made with herbs and vegetables as flavorings and garnishes, they’re as fresh and cool as they can be.

Garden-party cocktails are being served in style these days. A stalk of celery has been the traditional bloody Mary swizzle stick for decades, but inventive mixologists are going beyond celery with unexpected, just-picked garnishes and cocktail seasonings. Okra, cucumbers, pretty little sweet and hot peppers, sliced melons, and herbs of every description are joining sliced lemons, oranges, and cocktail onions in the handbooks of hip bartenders. Martha Stewart made it official, substituting a sprig of rosemary for the toothpick skewing the olive in a martini, and remade the classic drink. With recipes for tequila-thyme lemonade and cilantro-Campari cocktails, her twists on these summery beverages are on the cutting edge.

“I love basil martinis, and cucumbers and Pimms,” says Colleen Dudley, senior horticulturist at the Atlanta Botanical Garden, where “mix and mingle” evening gatherings have paired cocktails with plants and garden features. The popular series was built around themes like “sprouts and spritzers”, and “moonflowers and moonshine.”

“We just looked for the alliteration that goes with a drink,” Dudley says. There’s plenty of room for experimentation. A sprig of mint — or a handful of blueberries — looks refreshing and tastes delicious in a glass of lemonade. Fresh melon and mint perk up a sangria like a colorful summer sundown.

“You can have a lot of fun with it,” Dudley says. The spicy clove flavor of dianthus flowers have lots of cocktail potential, she says. Blue borage flowers are delicious and beautiful. In June, when peaches are ripe, Dudley muddles juicy peaches, blueberries, and perhaps a little mint with ginger ale and vodka for a cool, adults-only smoothie.

Scott Beattie, manager of Cyrus bar in San Francisco, puts parsley and spring onions in a gin drink he calls “April Showers” because the ingredients are all fresh in early spring. He combines anise hyssop, dianthus, borage, and feathery sprigs of fennel in another drink with a distinct lick of licorice — there are recipes for both drinks in his book Artisanal Cocktails, which is full of happy-hour ideas inspired by the seasons, and their harvests. 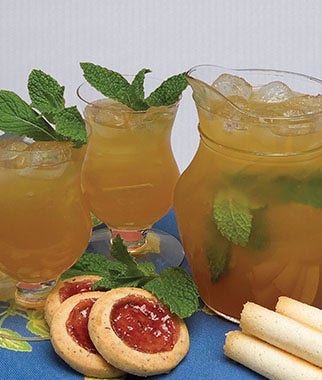