Last summer I became sandwiched between two political issues that appear sympathetic, but on close scrutiny show a profound and dissonant contradiction deep in the fertile soil of community gardening.

Recently, First Lady Michelle Obama boldly proclaimed that the urban poor were at serious risk of deprivation of fresh produce. The so called “food deserts” stretch from border to border in the poor and underprivileged sections of every major American city. One of the ways the First Lady proposed to solve this problem is to expand the size and number of community gardens.

However, there is also a trendy, stylish and even sexy movement in contemporary gardening that preaches the use of old fashioned or “heirloom” vegetables that were popular in our grandparents’ day. In community gardens everywhere, I see tall, rangy, low-yielding and romantically named heirloom varieties made popular by environmental activists over the last twenty years.

But there is trouble in this garden paradise. While the often lovely and uniquely flavored heirloom vegetables befit an upper middle class suburban vegetable plot, they fail to meet the urgent nutritional needs of the urban poor. In fact, old fashioned varieties, with their poor yields, late harvests and floppy plants, present logistical challenges that most community gardeners cannot meet. In contrast, modern hybrids— looked down on by today’s gardening elite—supply not only the requisite large quantity of vegetables that the poor need but also a nutritionally high quality of fruit, since they are loaded with greater amounts of vitamins and minerals than their distant ancestors.

Over the past several years, contemporary plant breeders have introduced nearly a dozen new cultivars of tomatoes, cucumbers, peppers and lettuce that record up to twice the amount of nutrients than ordinary store bought vegetables. While they don’t have the romantic or seductive names and stories behind them, such as “Mortgage Lifter” tomato, these new hybrids deliver vastly more antioxidants and vitamins C and D.

Further ironies abound. According to their zealous advocates, heirloom vegetables have the virtue of being able to be self-propagated, via do-it-yourself seed-saving techniques. The argument goes that self-perpetuating heirlooms provide low income families with an inexpensive means of sustaining themselves.

However, this virtue is not what it seems. Saving seeds can be just as tricky and time consuming as growing the vegetable garden itself. Seed must be collected, extracted, cleaned and put into dry storage. Paradoxically, the purveyors of heirloom seeds are at the elbow of community gardeners every year with new seeds to sell them.

Therefore, the poor and unemployed in the underprivileged communities of America are expected to spend more than twice the time and effort for less than half the benefits compared to hybrid seeds—especially the newest, nutrient rich varieties. But no one should underestimate the poor and unemployed¿ they know value when they harvest it. Give them more!

In addition, the swelling ranks of our nation’s unemployed include many potential gardeners. Recent news of the challenges facing food banks across the country suggests that community gardens are coming soon to many middle class neighborhoods. Perhaps we are not all out of work, or living in a food desert, but we should be mindful of those who are.

Although today’s hybrid vegetables, loaded with delicious fruit, are not today’s “flavor of the week” among gardening pundits, they address the food security needs of the urban poor more effectively than any hundred-year-old variety ever could.

As seen in the Philadelphia Inquirer. 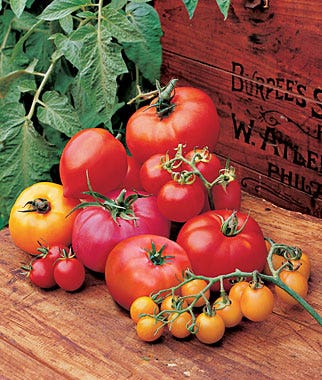