Don’t underestimate small bulbs. "It's not a question of how tall bulb flowers are, it's how they express themselves," says Piet Oudolf, the famous Dutch garden designer whose stylish plantings are inspired by nature, interpreted with an artistic eye and great confidence. Small spring-blooming bulbs such as crocus, scilla, chionodoxa, grape hyancinths, and species tulips figure centrally in Oudolf’s designs for large public gardens — including New York’s exciting High Line and Chicago’s spectacular Lurie Garden in Millennium Park — and they sparkle in home gardens, too.

“Every little thing that happens in spring is worth gold,” says Oudolf. “After a winter you want to see things come alive, and bulbs are one of the first experiences.” They capture your attention, even from indoors, and draw you out into the garden.

Fall is the time to tuck these little bulbs into flower beds, so they can establish roots and be ready to send their flowers up as soon as the sun warms the soil in spring. They’re easy to plant. In the artfully designed, sweeping perennial beds at the Lurie Garden, the small bulbs were distributed in a most informal way. Bulbs were mixed together in wheelbarrows and then tossed by the handful into designated areas in the design. They were planted where they fell, 4-6 inches deep. Where the plans called for crocus, anemones, and grape hyacinths, for example, different kinds of bulbs often ended up in the same holes. It looks crowded, but the bulbs will thrive; you don’t even have to worry about whether they are right-side up — in early spring, they’ll find their way up.

Deciding on a few such combinations and repeating them through the garden creates a pleasing rhythm, Oudolf says, but by hand-tossing the bulbs, the planting will not look stiff or self-conscious. Instead, "they look like they have seeded,” he says, “but in fact you have planted it, and it just looks spontaneous." 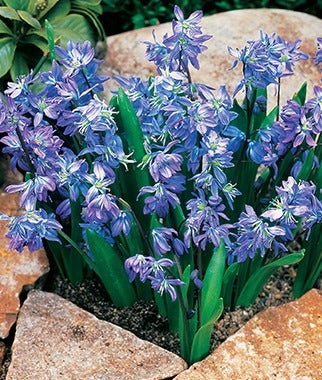