Gardening in the South - Bulbs

Many bulbs will come back year after year in the South and even multiply to create sweeps of color in spring, summer, and fall. But Southern gardeners should keep in mind that some bulbs are picky about their climate requirements to be reliably perennial, with tulips and hyacinths at the top of the list. These two popular spring bloomers must have several months of cold temperatures for good flowering, and a mild (not hot) growing season for maximum foliage, conditions more typical of Northern gardens.

While you might indeed see tulips and hyacinths come back in ensuing years in the South, they will never look as good as they did that first glorious season and will eventually disappear. So in Southern gardens, these two bulbs are typically used as annuals and replaced every year. Though some gardeners have had luck with the pretty, low-growing Tulipa clusiana.

Climate is also an important factor in selecting daffodils. The further south you go, the poorer the performance of large-flowered and late-blooming types. But there are plenty of early and midseason bloomers, and smaller or cluster-flowered beauties. And look for varieties that naturalize well.

Other good spring bulbs for the South are grape hyacinth, crocus, windflower, snowflake, squill, and snowdrops. For late spring and summer, amplify your perennial border with ornamental onions, lilies, dahlias, gladiolas, and iris. Daylilies, which have tuberous roots, are also often sold under the category of bulbs. For the shade, caladiums bring a tropical vibe. Though not reliably hardy even in the South, they can be dug and stored over winter or replaced every year as an annual. For the fall show, don’t forget red spider lilies and their cousin the pink-flowered naked ladies.

Southerners also have bulb options that might be less familiar to many gardeners, such as crinums (like milk-and-wine lily), old-fashioned tuberose, hardy amaryllis (Hippeastrum x johnsonii), rain lily, Hymenocallis (which loves wet soil), Nectaroscordum (a tall, airy relative of ornamental onions), calla lilies, and the native wild hyacinth (Camassia scilloides). Check your hardiness zone to see which bulbs and bulb varieties will work best in your area.

Despite the dry spells and even regular droughts in the South, there is plenty of yearly rainfall compared to some parts of the country. Most bulbs will suffer and rot in wet conditions, especially during their dormant rest period, which for many bulbs is in winter. A cold, wet winter, a typical occurrence in the South, can be a bulb killer. Therefore, it’s critical for your soil to be well drained, which might mean amending it with organic matter. You can also improve drainage by creating raised beds. Most bulbs also require at least six hours of sun a day during active growth. And since their foliage is used to store energy for the next year’s performance, it should never be cut back before it has finished this process and started to fade away.

Plants with underground storage structures are often grouped under the general term “bulbs.” But there are actually a variety of different types of structures, including true bulbs, corms, tubers, and rhizomes. To keep things simple here, they are all referred to as bulbs. However, take note of what you’re planting since there might be important variations as far as planting depth and positioning, and growth habits as they mature over the years.

Plant spring-flowering bulbs in the fall, which can extend into November and even December in the South. Don’t plant too early since warm temperatures might trigger foliage to sprout, which will then get nipped by the cold. Typically nurseries will ship bulbs at the appropriate planting time for your area. If not, then store them at below 60 degrees until the weather has cooled down (but never put them in the freezer). Bulbs that require a chilling period, like tulips and hyacinths, will come pre-chilled from the nursery. For summer- and fall-blooming bulbs, plant in the spring after the threat of cold weather and frost has passed. 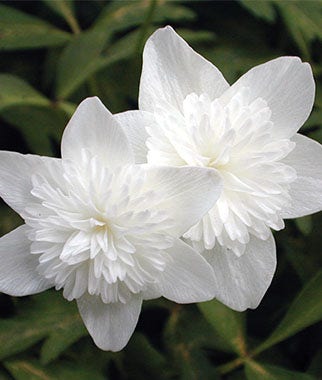