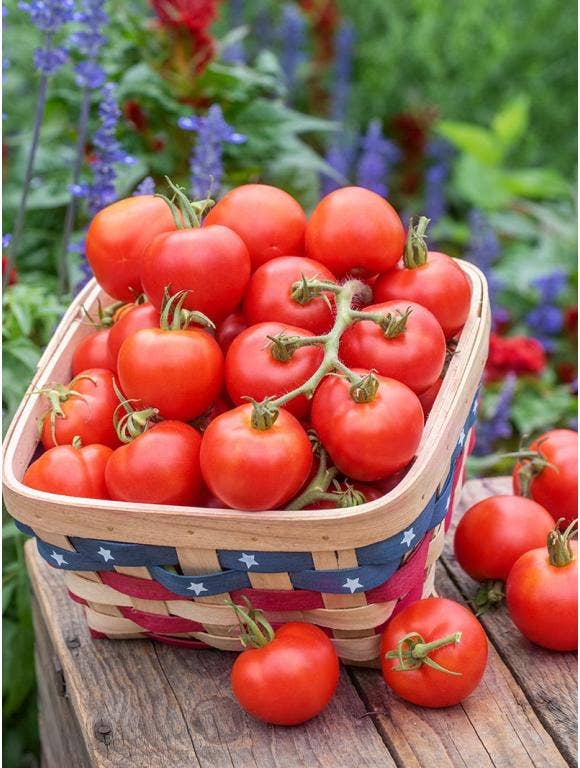 As summer heats up, vegetable gardeners wait anxiously for the first tomatoes to ripen, sun-warmed and sweet. But it's not always an easy wait.

Many things can go wrong with a tomato crop. Some you can guard against or fix and some you can't. But remember a few key points:

No tomato crop will ever be perfect. A certain amount of imperfection and loss is normal, though some years are tougher on tomatoes than others. There's little point in chasing perfection with noxious chemicals.

Many problems can be prevented. If tomatoes are properly chosen, planted and cared for, they are less susceptible to pests and many other problems. Let your troubles teach you how to prepare for next year.

Alertness saves tomatoes. Many problems can be corrected if you catch them early, so visit your tomato patch every day or two and check around for anything unusual.
Weather happens. Expect that some years it will be too hot, too dry, too stormy or too something else, and your harvest will suffer. But the good years will make up for it.
Imperfect tomatoes may still be good eating. The flavor of a cracked or misshapen tomato still will beat one from the supermarket. Just cut out any unsightly parts, or use it for cooking.

But here are some of the common problems that can beset tomatoes on their way to the dinner table:

Got lots of leaves, but no fruit? The plant is likely getting too much nitrogen, which triggers it to grow foliage, and not enough phosphorus, which favors flowering and fruiting. Choose a fertilizer that has a balanced ratio of the three major elements, such as 10-10-10, or where the middle number (phosphorus) is larger than the first number (nitrogen), such as 2-3-1. Tomatoes are heavy feeders and usually do need fertilizer unless your soil is very rich. But follow the directions carefully to avoid overdoing it. Slow-release fertilizers, including organic formulas such as Burpee's Organic Tomato Fertilizer with Aragonite have a greater margin of error than fast-release water-soluble kinds.

Do the blossoms fall off before fruit forms? Blossom drop is usually caused by too-cool weather; tomatoes are native to subtropical Central America, where they evolved to need warmth to form their fruit. The problem will clear up as the weather warms. Cool weather can also cause curled, leathery leaves, which also is harmless. These are among many reasons not to rush tomatoes into the garden in spring.

Is the tomato puckered or distorted? Does it have a big scar at the blossom end? That scar is called a "catface." Tomatoes often get catfaced or misshapen if the nights are too cool while the fruits are forming -- another good reason not to plant too early. Look for varieties that have been bred to be resistant to catfacing. Misshapen fruits are edible. Bear in mind, too, that many older varieties prized for their flavor, such as 'Brandywine,' are normally not perfectly red and round.

Are the tomatoes cracked? This indicates that when the fruit was forming, it didn't get an even supply of moisture from the plant's roots. A sudden rush of water up through the stem can pop the skin of a ripening fruit like an overfilled water balloon. Take care with your watering; instead of a quick sprinkle every day, water deeply once or twice a week (depending on rainfall) so the moisture soaks deep into soil where the roots can take it up as needed. Soaker hoses can help here. Stick your finger into the soil every day to check that it is evenly moist (not wet) a couple of inches below the surface. And always mulch tomatoes to keep moisture from evaporating, even in containers. So-called "self-watering" or "sub-irrigated" containers can help even out the water supply for plants in pots. Some tomato varieties resist cracking (at the expense of a tougher skin). Cracked tomatoes are edible.

Do the tomatoes have a soft or rotten spot on the bottom? Blossom end rot is a sign of a calcium deficiency. Most often, this is caused by uneven watering; swinging between wet and dry soil interferes with the plant's ability to use calcium. A soil test before planting will tell you if there is a calcium deficiency in your soil. Fertilizers made for tomatoes usually include calcium. You can eat tomatoes with a small amount of blossom-end rot if you cut the rotted part off.

Are the leaves wilting or yellow? Although healthy soil normally contains many microorganisms, some fungi and bacteria cause diseases in tomatoes. The most common are verticillium wilt and fusarium wilt. You can spot them if you cut through a major stem and find the inside is discolored. Diseased plants can't be saved, so concentrate on preventing a recurrence. First, get diseased plants entirely out of your garden; put them in the landscape waste, not the compost pile. Always rotate your crops: To interrupt the life cycle of soil-borne diseases, don't plant tomatoes or related plants such as peppers in the same place in the garden more than once in three years. Don't re-use potting mix that held a diseased plant. Too-wet soil can encourage fungus diseases, so once again, work at maintaining steady moisture in the soil. Fungicides are at best partially effective in preventing infection, and only if they are applied regularly all season, starting at planting. They won't stop an infection once it has started. Look for tomato varieties that have been bred to resist disease; catalog descriptions and seed packets often will have a code such as "VF" to indicate that they are disease-resistant. Heirloom varieties may be more susceptible to disease -- that's one of the reasons hybrid varieties were developed -- so if you choose them, be aware of the increased risk.

Do leaves have spots? Tiny spots may be due to spider mites, which tend to gather on the undersides of leaves, as do tiny pale aphids. A good spray from the hose (including both sides of the leaves) often will take care of such an infestation. If that doesn't work, try an insecticidal soap (avoid home-grown soap solutions, which can strip the protective coating from leaves). Sometimes brown spots indicate a minor fungus infection. To deter fungus problems, avoid overwatering and stake plants so they get good air circulation.

Do the stems have spots? Brown patches on the stems, especially at the joints, can be the earliest symptom of a nasty fungus disease called late blight whose spores spread to tomatoes from potatoes, often after periods of wet weather. It has been a big problem in the Northeast in recent years. If you suspect late blight, act quickly to dispose of the infected plant before the disease spreads.

Do the tomatoes have pale spots? This may be due to sunscald, if you pruned so severely that the tomatoes don't have enough leaves to give them a bit of shade. Be careful not to over-prune when you are staking and tending your vines. Little round pale spots are often caused by stinkbugs, which suck the sap from the fruit. You can eat the unspotted part of the tomato.

Are the edges of the leaves nibbled? Look around for tomato hornworms, the two-inch-long green caterpillars of a large moth. Pluck them off and drown them in soapy water. But if a caterpillar has white knobby growths on it, leave it be. You are getting help from a parasitic wasp that has laid its eggs in the caterpillar's flesh. As the eggs hatch, baby wasps will eat the worm. Yum!

Are chunks bitten out of the tomatoes? Often the culprit is squirrels. The only real way to protect a tomato crop is with a physical barrier, such as by surrounding it (including the top) with chicken wire. Since there are so many squirrels in the world, you may have to resign yourself to planting enough so that you can afford to let the squirrels have some. To be safe from disease, don't eat the unbitten part of a squirrel-sampled tomato.