How to Grow Huge Pumpkins 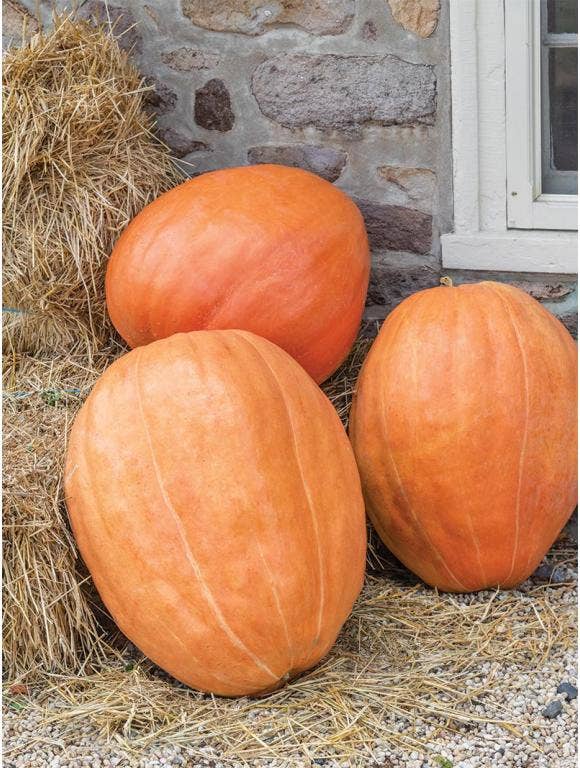 Most champion pumpkin growers have their own methods and secrets for producing the gigantic pumpkins that win pumpkin contests every year. Of course, it is necessary to start with the right kind of pumpkin seed, one that is selectively bred to produce the really big pumpkins such as "First Prize Hybrid" which, with the proper growing methods, can produce pumpkins in the 300-pound range.

Pumpkin plants need a lot of sun. Choose the sunniest place you have; remember that pumpkins are sensitive and will need shelter from wind and frost. Try to protect pumpkins from the worst of the elements by covering them during heavy rains, or putting up some kind of barrier to protect the vines from high winds or using shade tents during summer’s hottest days.

Pumpkins like and need a lot of water, but don't plant pumpkins in wet or dense soil. They need good, well-drained soil. You can dig it up by hand. Don’t use a tractor, pumpkin roots don’t go down very far. Prepare the soil in early spring, as soon as the ground is warm. Fertilize the patch with a good four inches of rotting cow manure. Pumpkins do best in soil that is slightly acid or nearly neutral.

If you live in a part of the country where there is still danger of frost in late April or early May, start pumpkin seeds indoors about two weeks before planting. Sow one seed for every four-inch peat pot filled with grow mix. Keep the pots watered, never let them dry out.

How to Plant Pumpkins

When seedlings have the fourth or fifth leaf, set them outdoors in hills about the size of a pitcher s mound, one plant to a hill. Protect pumpkin seedlings the first few weeks with plastic-covered frames. Space each hill at least 20 feet apart.

How to Fertilize Pumpkin Plants

Pumpkin plants have two kinds of flowers, male and female, which appear in early July. The male flowers show up first, followed by the females. Look out for the first female flowers. Look for vines to be strong and well-established before letting a female flower set fruit. It might help to break off the first female on each vine and wait for the second or third, when the vines are at least ten feet long. A female is easy to recognize: she has a baby pumpkin at the base of each flower.

You need a big vine to produce a big pumpkin, so in a sense you’re choosing the vine before the pumpkin. When you find a vine that’s strong enough and a female flower on the verge of opening, put a bag of cheesecloth over it for the night to keep the insects out. The next morning pick a fresh male bloom, trim off the corolla or outer petals, and rub the pollen-laden stamen in around the center of the newly opened female bloom.

How to Grow Pumpkins 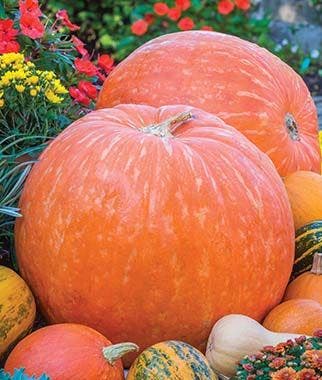 This is just the beginning of a summer of long but rewarding work. What you have started is actually a pumpkin-producing factory. Remember that there are 100 or more leaves to each vine and if you are trying to grow a 300-pound pumpkin, each leaf is responsible for up to four pounds of weight in your pumpkin. Every leaf, every stem, every hair roots is now receiving sunlight, absorbing water, and blending nutrients. All are traveling down the all-important stem to your prize pumpkin.

Giant pumpkins balloon out from the vine and if precautions are not taken, they will tear away and lose touch with their all-important stem. Since vines put out roots at every leaf, tear out the roots of the vine where it is close to the pumpkin. This will give it free room to grow without damage to the vine. Gently train vines away from the pumpkin to prevent it from crushing them, try giving them a nudge in the right direction every day.

When two or three fruits on each plant reach the size of softballs, remove all but the most promising one and start to prune the pumpkin plants. After the primary vine has reached 20 feet, pinch off the tips and the side shoots so the vines won't divert resource from the fruit. Break off all the other female flowers A potential prizewinner is forming. The work of the plant now must go entirely toward nurturing this fruit alone.

It is important to remember that the only thing that will increase the size of the fruit comes out of the vines and the vines must get support from the natural root. For growing really big pumpkins, the most important things to remember are seeds, soil, sunshine, and water.

By mid-August the plants are pulling in water and nutrients at a great rate. Nighttime is when pumpkins do their growing, most expand two inches in circumference every night.

If it’s a dry season, give each plant 15 to 20 gallons of water twice a week. Water in the evening, and water only the base of the plant to keep the leaves dry, which reduces the risk of disease.