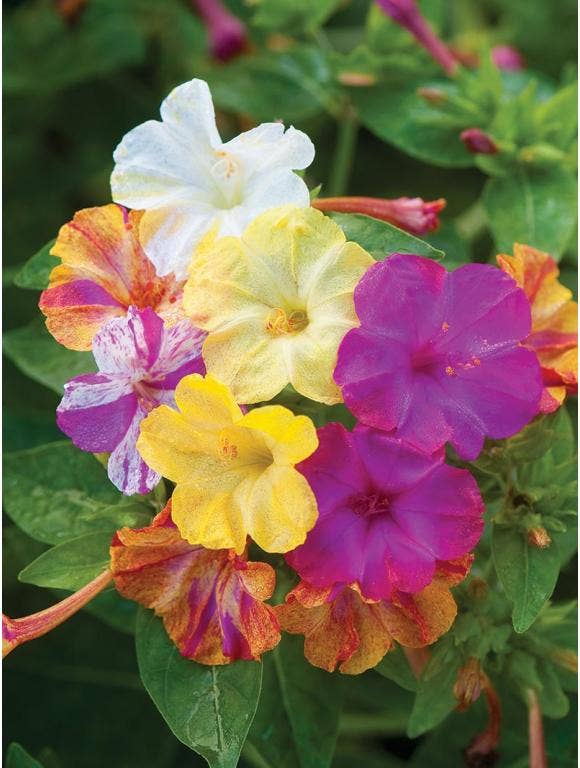 You can’t exactly set your watch by the colorful four o’clocks in your summer garden, but their timing is pretty good.

The bloom time of four o’clocks (Mirabilis jalapa) is said to correspond to changes in light and temperature, so they open in the cool of the evening, usually between about four and eight p.m., or a bit earlier on cloudy afternoons.

Their abundant, trumpet-shaped blooms may be bright yellow, white, magenta, or wonderfully striped or splashed with pink, orange, or yellow. Sometimes several flower colors can be seen on the same plant. The flowers are fragrant, with a scent that is both lemony and sweet, and hummingbirds and moths are attracted to them.

Four o’clocks are easy to grow from seed. Plants get to be two or three feet tall in sunny spots or in part shade, and they bloom from midsummer until frost. In relatively warm-winter climates, four o’clocks will come back every year from tubers that overwinter in the ground. Seedlings can be a nuisance, but sometimes they find their way to the most interesting places in the garden, and plants you don’t want are easy to weed out when they’re small.

Four o’clocks are old-fashioned favorites for a commuter’s garden, says Peter Loewer, author of The Evening Garden and an expert on the flowers that bloom from dusk until dawn. Moonflowers, evening primrose, flowering tobacco (Nicotiana alata), some tropical water lilies, and even a few daylillies also bloom in the evening, which makes them nice choices for around a patio, where you can enjoy their flowers after you get home from work. They’re especially pretty on moonlit nights, and in the flash of fireflies.

Flowers Around the Clock

Morning glories and most daylillies are among the first flowers to open on a summer day, and poppies, zinnias, and marigolds follow along early in the day. By noon, the morning glories have usually closed up shop. When evening comes, it’s time for the four o'clock, moonflowers, creamy-white tuberoses, and other night bloomers — many of them fragrant. Phlox, flowering tobacco, and lillies are all especially fragrant in the evening, but if you’re up early, you may also catch a whiff of them, and of your four o’clocks, on your way to work in the morning. 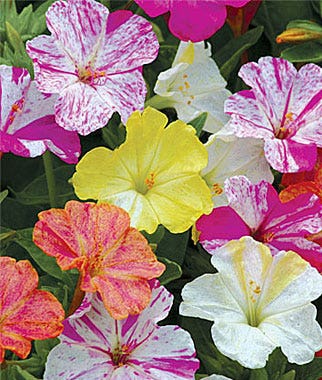