Browse By Topic:
Posted in: Dianthus 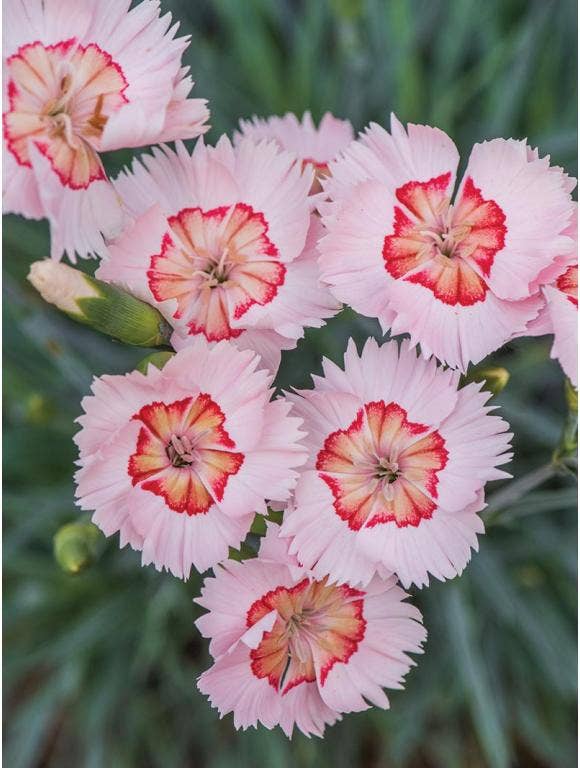 The history of cottage gardens is perfumed with the pretty, frilly flowers of Dianthus. “Pink" is the well-known common name for Dianthus — but there are cottage pinks, Cheddar pinks, border pinks, Chinese pinks, and maiden pinks, to name just a few, each with its own charms. Hundreds of hybrids have been introduced, and many of them are deliciously clove-scented. Sweet William, which is especially easy to grow from seed, is also a member of the Dianthus family.

Dianthus are perennial, annual, or biennial plants with feathery silver-green or blue-gray leaves, usually forming a tight mound or mat. Dianthus flowers rise from two inches up to two feet above the leaves, sometimes leaning a little lazily as they stretch toward the sun. The blooms, which have a ruffled edge that looks as if it has been trimmed with pinking shears, are typically only about an inch across, but healthy plants produce dozens of showy flowers at once. Dianthus flowers may be snow white, blush pink, bright magenta, or bicolored, with a flashy contrasting center or picotee edge. ‘Diana’s Blueberry Hybrid’ is a soft but dazzling blue.

Dianthus are drought-tolerant plants for sunny spots at the edge of a flower bed or a path. The plants take hold willingly in the cracks of a rock wall, where their roots can stay cool. In small flower pots, pinks spread out to make a handsome display. They flourish in the cool temperatures in spring and fall, but they are surprisingly adaptable. As long as they are planted in well-drained soil, they tolerate heat and thrive where rainfall and humidity are high. Dianthus flowers bloom prolifically in early spring and summer, but many dianthus will rebloom throughout the gardening season if you cut flowers off as they fade. Hedge shears will do the trick, leaving a tufty mound of foliage. Do not mulch too close to your Dianthus.

Pinks were widely popular in colonial America: Thomas Jefferson mentioned pinks repeatedly in his garden diaries. He grew sweet William, which is a biennial dianthus (D. barbatus), and is sometimes called bunch pink or London pride. Dianthus pinks of all kinds are pretty and long-lasting cut flowers. They are typical old-time posey plants and perfect button-hole blooms, but they suit modern gardens and gardeners, too: the plants have a sleek look and do not need pampering, and the fragrance has just the right amount of spice. 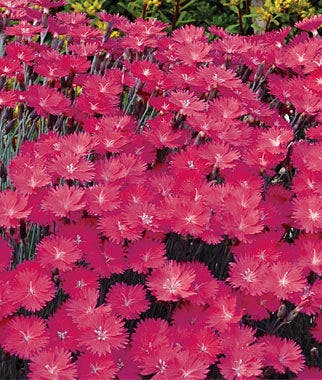