Can I Grow Watermelons?

Every gardener should plant a hill or two of watermelon plants as they are easy to grow and, oh so good on sultry summer afternoons. 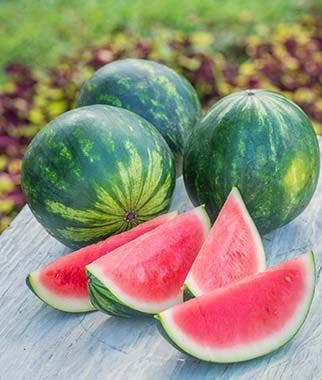 Try a small variety such as an eight-pound 'Seedless Big Tast Hybrid' that will fit in the refrigerator easily, or go for the glory and sow watermelon seeds for a whopper like the 30-pound 'Million Bucks Hybrid'. Heirloom fans will want to plant 'Moon and Stars', introduced in 1926 with a deep green skin speckled with tiny yellow stars and quarter-size moons. The leaves are speckled with yellow stars as well. If you don't have room in the garden for watermelon vines, think about growing them in the middle of the lawn. Yes, in the middle of the lawn. Simply dump two 40-pound bags of composted cow manure and one 40-pound bag of topsoil into a heap on the lawn. Mix and mound with a trowel or by hand to integrate all materials. Water well and plant 6 to 8 seeds and later thin to three plants. The vines will ramble all over the lawn, and you will have to mow around them. But, the watermelon foliage will shade most of the grass underneath it and slow growth.

After harvest, pull up watermelon vines; rake the nutrient-rich manure mix over the lawn for fertilizer and water well. Within a week, the grass will be growing vigorously again, and it will be a healthy dark green.

Watermelons probably originated almost 5,000 years ago in the Kalahari Desert of Africa where botanists have found its wild ancestors still growing. Watermelons migrated north through Egypt, and during the Roman era they were cultivated and prized. Hieroglyphics on the walls of Egyptian buildings tell stories of their harvest. Watermelons were buried in the tombs of kings to nourish them in the afterlife. Melons spread across the European continent and particularly flourished in the warmer Mediterranean areas. Watermelons were documented in 1629 in Massachusetts. During the Civil War, the Confederate Army boiled watermelon to make molasses for cooking. It is in the Southern states such as the Carolinas and Georgia where watermelons flourish as commercial crops. Numerous varieties were developed, and variations of flesh color surfaced. By the late 1800s, the W. Atlee Burpee & Co. was developing its own watermelon varieties and selling seeds.

Should I Grow Watermelon Seeds Or Plants?

Watermelons need a long growing season (at least 80 days) and warm ground for seeds to germinate and grow. Soil should be 70 degrees F or warmer at planting time. Sow seeds 1 inch deep and keep well watered until germination. To get a jumpstart in cooler climates, cover the planting area with black plastic to warm up the soil and start seeds indoors two or three weeks before they are to be set out in the garden. Don't start seeds any earlier, because large watermelon seedlings transplant poorly. Plant 3 seeds in 3- or 4-inch peat pots or large cell packs, and thin to the best plant. Sow watermelon seeds 1/2 inch deep. Place in a sunny south-facing window or under lights to germinate. Make sure the area is warm?day and night?ideally 80 degrees F. Use a Seedling Heat Mat if necessary.

How To Cultivate Watermelon Plants

Watermelon is a space hog; vines can reach 20 feet in length. So plant where there is plenty of open ground. Amend soil with organic matter such as compost or composted cow manure. Add a balanced fertilizer that is high in nitrogen. Sow 8 to 10 watermelon seeds in a hill, and push seeds 1 inch into the soil. Space hills 3 to 4 feet apart, with at least 8 feet between rows. Thin plants to the 3 best in each hill. Keep soil free of weeds by shallow hoeing or with a layer of mulch.

Watermelon plants have moderately deep roots and watering is seldom necessary unless the weather turns dry for a prolonged period. When vines begin to ramble, side dress plants with half a cup of balanced fertilizer (5-10-5). A third application of fertilizer should be made when melons are set. Withhold water as melons start to mature to intensify sweetness.

When vines begin to ramble, give watermelon plants a dose of boron to help them produce sweeter fruits. Dissolve 1 tablespoon of household borax in 1 gallon of water and spray foliage and the base of the plants. Select short-season varieties such as 'Million Bucks Hybrid' or 'Orange Sunshine Hybrid' if your growing season is less than 90 days. Start watermelon seeds indoors and use black plastic mulch.

Cucumber beetles and vine borers are the worst watermelon pests. Apply an insecticide such as Sevin or use Bacillus thuringensis for organic control. Floating row covers work, too, but they should be removed when watermelon plants start to bloom, at which time pollinating insects must be allowed to reach the flowers. 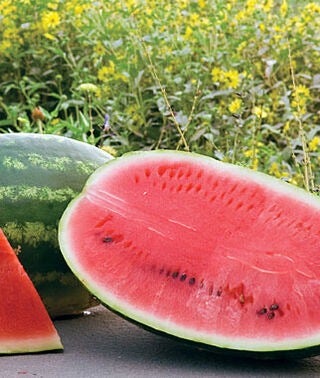 Knowing how to determine when a watermelon is perfectly ripe is not easy. One way favored by many gardeners is to watch the tendril closest to the melon stem. A tendril is a modified leaf or stem in the shape of slender, spirally coil. When it turns brown and dries up, the melon is ripe. The trouble with this method is that with some watermelon varieties, the tendril dries and drops off more than a week before the melon is fully ripe. Slapping and tapping or thumping are other common methods used to determine ripeness, but they are not always accurate.

The surest sign of ripeness in most watermelon varieties is the color of the bottom spot where the melon sits on the ground. As the watermelon matures, the spot turns from almost white to a rich yellow. Also, all watermelons lose the powdery or slick appearance on the top and take on a dull look when fully ripe. After picking a watermelon, chill it before serving for best flavor. Some folks sprinkle a little salt on their watermelon, but it's probably thought of as a cure for poor tasting store-bought melons and certainly not necessary for home-grown. If the seeds present a problem, grow seedless watermelon varieties like 'Seedless Sugar Baby Hybrid' or 'Orange Sunshine Hybrid'. A cut melon, if covered with plastic wrap or aluminum foil, will keep several days in the refrigerator.

See all our watermelons