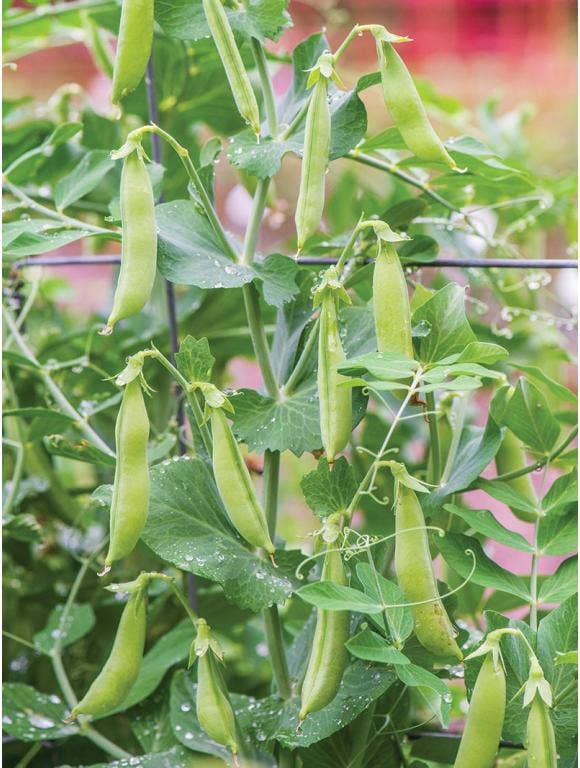 Can I Grow Peas?

Once planted, peas need little attention other than watering and harvesting. Pests and diseases are rarely a problem, particularly if disease-resistant varieties are planted. Just keep an eye out for aphids on the pea plants and get rid of them with a sharp spray of water from the garden hose.

How to Grow Green Peas

Green Peas thrive in cool weather and young plants will tolerate light frosts. Once germinated, green peas adapt well to the cold, damp climate of early spring. Peas must be planted as early as possible in the spring to get a full harvest before hot summer temperatures arrive and put an end to production. In temperate zones, the saying "Plant peas by St. Patrick's Day" holds true. Otherwise, plant peas about a month prior to your frost-free date.

For a fall crop, you'll have to nurse the seedlings through late-summer heat with shade and diligent watering until cool weather arrives.

The 'days to maturity' listed on the seed packets are calculated from the date of direct seeding, but soil temperature determines how long it takes for pea seeds to germinate.
For example, if the soil is 40 degrees F., pea seeds may take more than a month to sprout, while at 60 degrees F. or above, they take about a week. So, the days to maturity can be misleading. Use the information only as a guide for determining early, mid-season, and late varieties.

Peas prefer a fertile, sandy loam that drains well, but will tolerate most soils except heavy, impermeable clay. Work in plenty of compost to keep the soil friable. A pH level of 6.0-7.5 is preferred. Where soil is very acidic, apply dolomite or agricultural lime. If you've never grown peas before, why not try a bed of the early bush types, like 'Spring' or 'Burpeeana Early' garden peas or 'Sugar Bon' snap peas? If you have limited garden space, plant 'Alderman' heirloom garden peas or 'Super Sugar' snap peas on a trellis or fence. This way you can get maximum yields using only a few square feet of garden space.

The green pea is one of the oldest cultivated vegetables in the world. Although its origin is obscured in history, peas were found in excavations in Switzerland dating to the Bronze Age and in an Egyptian tomb at Thebes. Peas were popular with the ancient Greeks and Romans. In fact, the word 'peas' is a derivation of the Latin 'pisum.' The Anglo-Saxon word for peas was 'pise' or 'pease' as in the nursery rhyme, 'pease porridge hot, pease porridge cold.'

Peas were originally grown for their dry seeds, in fact, for centuries people thought 'green' peas were poisonous! Fresh-shelled green peas are not mentioned in history until after the Norman Conquest of England. By the end of the 16th century, peas were being perfected in Germany, Belgium, and England.

The earliest colonists brought peas to the New World where this valuable vegetable became a staple in their diets. In 1602, the Mayflower Colony logbook records that peas planted by Captain Gosnold produced respectable yields on the island of Cuttyhunk. Even Captain John Smith wrote of the abundant crop of peas the Jamestown colonists enjoyed in 1614. To this day, peas are one of our favorite vegetables.

Should I Plant Pea Seeds Or Plants?

Although peas can be started indoors in peat pots for transplanting, they really don't make the transition well. Disturbing the young roots can diminish yields later in the season. If this is the only way to get an early start, go for it. Otherwise, sow the seeds directly in the soil about a month before the expected last frost in your area.
Plant early, mid-season, and late varieties to get maximum pea production. In the spring, instead of planting different varieties at weekly intervals, plant peas all at once. They'll mature at different times, staggering the harvest.

The following varieties are recommended:

Fall pea crops are finicky and many gardeners end up with mixed results. But, for the reward of an extra crop, the minimal effort and expense is well worth the gamble. The trick is to finish the harvest before a hard frost. To determine when to sow your fall crop, check the days to maturity for the pea varieties chosen and count backward from the expected first frost date. Outstanding winter pea crops can often be grown in Zones 9-11.

How to Direct Sow Peas

How To Culivate Pea Plants

Here are three cultivation tips to keep in mind.

Preferably in wide rows. Peas grown close together shade out weeds, keep the soil cool, increase yields, and make the most efficient use of garden space. Simply broadcast the seed in the row, allowing the seeds to fall as they may, some even touching. Cover with an inch of soil in the spring; two inches in the summer for your fall crop. Don't thin the pea plants when they germinate.

Peas are light feeders and don't generally require fertilizer. In fact, too much nitrogen will make the plants develop lush foliage at the expense of pod production and be more susceptible to frost damage.

Water deeply once a week. Never allow the soil to dry out totally or you'll drastically reduce pea production. The critical time for watering is when the plants are blossoming and producing pods. When pods are maturing in hot weather, water daily if needed to maintain pod quality.

To get peas in the ground and germinating as early as possible in the spring, plant them in raised beds. The raised beds warm up faster than the surrounding ground. 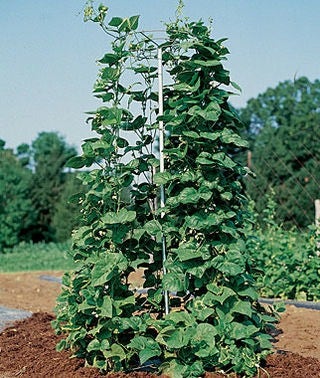 All peas, even the dwarf varieties, grow best with support. Peas are productive and less susceptible to rot if given some support or, for taller varieties, planted along a fence or trellis. Interlace untreated twine between posts to act as a trellis. At the end of the season, just cut down the twine, pea vines and all, and toss on the compost pile. Use 'pea brush' broken tree branches shoved into the soil of the pea bed to provide support for the 'bush' types like 'Maestro' and 'Wando'.

Like other members of the legume family, peas have a symbiotic relationship with Rhizobia bacteria that colonize the roots of the plants and help them 'fix' nitrogen in the soil. After soaking the seeds overnight in lukewarm water, drain them and sprinkle an inoculant over them just before planting. This will boost the pea plants and produce higher yields.

Because peas' feeder roots run shallow, mulch is essential to keep the soil around the roots moist and cool. When the seedlings are two inches tall, apply a mulch of clean straw, chopped leaves, or compost. As the pea plants mature, you can add more mulch to keep them happy.

Aphids are the major pests for pea plants; luckily, they are easily controlled. Simply spray the plants with cold water to knock the bugs to the ground. If a heavy infestation occurs, resort to an insecticidal soap spray, rotenone, or pyrethrum. Aphids can spread mosaic virus if you haven't planted disease-resistant pea varieties, so be sure to get them under control as soon as you notice them.

Powdery mildew is the most common disease of green peas, usually striking as the weather warms. Other diseases that cause problems are pea enation mosaic virus, fusarium wilt, pea leaf roll virus, and root rot.

There are two key ways to keep pea diseases at bay:

Plant disease-resistant pea varieties, especially if any particular diseases are a problem in your area. For example, pea enation is common in the Pacific Northwest. Ask veteran gardeners in your neighborhood or the Local County Extension agent for suggestions on what varieties to select.

Practice crop rotation to prevent root rot. To make sure peas don't suffer from soil-borne diseases, make sure not to plant peas or other legumes in the same bed more than once in every three years.

To determine when to pick shell peas, check the pods by eye and feel. If the pod is round, has a nice sheen, and is bright green, it's ready. If the seeds have made ridges on the pod and the pod is a dull green, it's past its prime. You can pick snap and snow snap peas at any time, but they're tastiest when the pods still have some play around the peas when you squeeze the pods. Pick snow peas before the peas start to enlarge in the pods.

Here are a two things to remember as you enter the pea patch with basket in hand:

Pea stems snap easily and the root systems aren't very deep. If not careful, you can damage the plant or even pull it out of the soil. Use both hands - one to hold the vine and the other to pinch off the pods.

When the harvest starts, spring or fall, pick every other day to keep the pea plants in production. Picking frequency definitely affects total yields. Pick any pods that are overly mature; if left on the vine, yields will diminish.

Peas are best when cooked very quickly, with as little water as possible, to retain their sugars and flavors. Do not boil them as sugars will dissolve and flavor will be lost. Steaming until just tender is the trick or stir-fry briefly.

If the harvest exceeds the appetite, there are basically two ways to store peas.

Although peas freeze well, they lose texture. Freeze them immediately after harvest to retain their rich flavor. Blanch the peas for two minutes in boiling water, immediately drain and plunge into ice water for two minutes. Drain again, loosely pack the peas in plastic bags or containers, and pop them into the freezer. Use the peas within nine months for the best quality.

Peas can be dried in a dehydrator and stored in sealed canisters for use in the winter in soups and stews. The quality is not on a par with frozen or fresh peas; however, as dried peas tend to be starchy and grainy in texture.