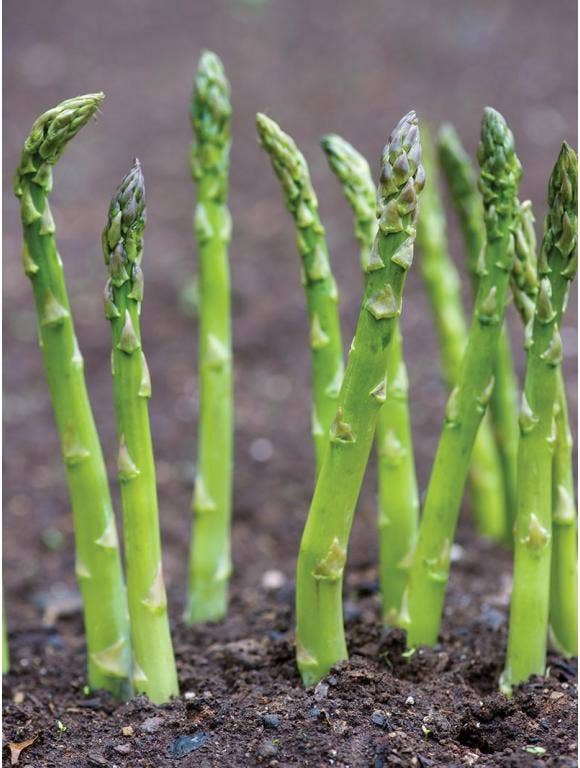 Can I Grow Asparagus?

Asparagus will grow well in virtually all areas of the US and lower Canada, except where there is extreme summer heat. For marginal areas where the lack of reliable freezing temperatures fail to initiate a dormancy rest period, withholding water in the winter can achieve a similar effect. Although asparagus favors a sandy loam soil, it is quite tolerant of all but the densest clays. As long as drainage is good and soil moisture can be maintained during the growing season, the asparagus plants will thrive. Asparagus should be planted in a new section of the garden that has never been cultivated. This will minimize soil-borne diseases that can attack the plants when growing asparagus.

Yields will be highest in full-sun sites, but asparagus plants will also tolerate partial shade. The optimum pH range for growing asparagus is between 6.5 to 7.0. Test for pH the fall before establishing a new bed of asparagus as an average of six months is needed to raise pH. Pulverized limestone is the least expensive and fastest acting way to raise pH. A bit pricier but easier to apply and somewhat slower acting, are pelletized and granular limestone that can be applied with spreaders. After initial application to correct pH, the rule of thumb to maintain pH is to apply 5 lbs. of lime each year for every 100 square feet of planted area. Where soil pH is too high, apply sulfur to correct as recommended by a soil test or at a rate of 1/4 lb. per 100 square feet each year.

What is the History of Asparagus?

Native to the seacoasts of Europe and Eastern Asia, asparagus is known for its tolerance of salt. In fact, some lore has gardeners discouraging weeds by dousing asparagus beds with salt. A mixture of 1 to 2 pounds of salt (NaCI) dissolved in a gallon of water can be sprayed or sprinkled on the bed, but not on emerging spears or young ferns. This won't entirely eliminate the weeding chore, but it can help. Mulching does a much better job and helps conserve moisture when growing asparagus.

Should I Plant Asparagus Seeds or Plants?

Although most gardeners prefer the convenience of setting out asparagus crowns (roots), those wishing to plant more than the three dozen or so plants sufficient for a family of four might appreciate the economy of growing asparagus from seed. Taking three weeks to germinate and slow to get going, the asparagus seeds should be sown indoors 12 to 14 weeks before the target seedling set-out date, which should be after the danger of frost has passed. Sow seeds 1/4-inch deep using a sterile seeding mix in individual 2-inch cells. Acclimate in a cold frame for one week prior to setting out in the garden.

However, most of us will opt for asparagus crowns. Upon receipt, keep crowns covered with a damp cloth or newspaper in a cool, dark, place until planting time. Unlike seedlings, asparagus crowns can be set out whenever the soil can be worked, which is usually about the time they are shipped.

How Do I Cultivate Asparagus Plants? 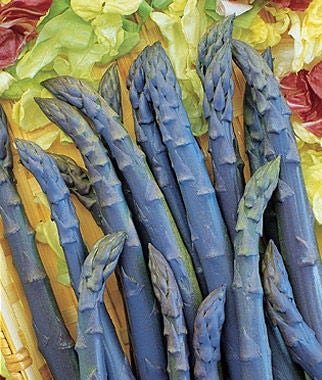 Asparagus should be grown on the north or east side of the garden so mature ferns will not shade other vegetables. Traditionalists plant asparagus in deep trenches partially filled with soil amended with compost or rotted manure. This can be labor-intensive especially where rocks or roots are present. An alternate technique requires almost no digging (deep power tilling will do) and relies on surface fertilizing and raising soil above the bed.

Prior to planting asparagus, broadcast and work in 1 to 2 lbs. of 5-10-10 fertilizer, or the equivalent, per 100 square feet of planting area. Apply lime with the fertilizer if not done earlier.

Dig a V-shaped trench 6 to 8 inches deep and about the same width at the bottom. Set out the asparagus crowns with the roots spread out in all directions. Space at 12 to 16 inches apart for thick spears; 8 to 10 for thin. Cover the crowns with 2 to 3 inches of soil and water in thoroughly if soil is not already moist. During the asparagus growing season, gradually refill in the trench, but avoid covering the asparagus shoots as they grow. Afterwards, by pulling soil from the path area, the beds can be raised several inches higher for improved drainage and winter protection. Garden rows should be 4 to 5 feet apart. Some may prefer to widen the base of the trench to stagger the plants in the row for intensive planting. Side dress in late July or August with 1 lb. of 5-10-10 for each 100 square feet of growing area.

Through the first summer, and somewhat less so during the following year, do not let the asparagus bed dry out. Maintain steady soil moisture if rainfall is lacking. Weekly water applications to wet the soil down to 8 inches should be sufficient. In late fall, after the ferns have turned completely brown, cut and remove all asparagus stalks and any weeds in the bed. This aids in reducing wintering-over insects. The stalks are useful in laying down an airy foundation for a compost pile.

How to Grow Asparagus

Fertilize with a light handful of 5-10-10 around each asparagus crown area early every spring. Avoid high nitrogen fertilizers as they throw off the fern-to-root balance in the plant, and avoid hot manures such as hog, sheep or poultry. Bone meal and high calcium dolmitic limestone are often recommended. While watering is thought necessary only during drought periods, asparagus yields will improve if steady soil moisture levels are maintained. Mulching reduces weeding chores by controlling weed seed emergence and helps to improve the soil by slowly adding organic matter as it breaks down. Mulch also protects asparagus spears if frost occurs during early spear emergence. A loose mulch layer of 4 to 6 inches of leaves or straw is preferred to a heavy material that could smother and prevent spear growth. Be diligent in keeping the asparagus bed free of weeds as they compete for nutrients and can mat the soil surface.

What Insects & Diseases Can Kill Asparagus?

The main asparagus disease culprits are fusarium wilt and crown rot, and to a lesser extent rust. Fusarium causes significant decline in yields and shortens plant life. In the spring, asparagus spears appear wilted and small and may have a brownish color. It may not always be identifiable by the home gardener, but inspection of the asparagus roots by an extension agent can confirm its presence. To minimize fusarium dangers, avoid sites where asparagus has grown in the last 8 years, and select disease resistant varieties.

Crown rot appears as deterioration and rotting of tissues where the stem and the roots join. It is a usually caused by soil-borne fungi and will eventually kill the asparagus plants. The best defense is to plant resistant varieties.

A gang of four different insects might threaten your asparagus patch. Two asparagus beetles, the common and spotted beetle can do damage. The common has a bluish head with a bit of red behind it and dark blue wings with yellow spots. Adults lay rows of black eggs on young shoots which hatch in a week of so. The larvae (dark-olive in color) feed on the shoot tips for a couple of weeks before dropping to the soil where they eventually mature to adults.

Brushing off the eggs or handpicking the larvae is an effective control. The spotted beetle is reddish orange with black spots on the back. The eggs are yellow to light green in color.

Encouraging beneficials such as ladybugs or applying insecticidal soaps reduces aphids, noticeable by their massed presence on growing asparagus tips and the sooty blotches they leave behind.

Light-colored thrips, which can be quite harmful, can be detected by shaking a fern over black paper, or as farmers do, on the hood of their dark-painted pickups. If heavy rains don't come to your aid, try a high-pressure hose spray to discourage thrips. Insecticidal soaps help as well.

The best defense for asparagus is to choose the right variety and planting location and to be a careful observer. In most cases, asparagus will thrive for many years with a little care and routine maintenance.

If started from seed, asparagus will take about 3 years to become productive. One-year-old asparagus crowns will need two years of growth prior to harvesting and two-year-old crowns, just one year. Be patient the first year of cutting by limiting spear harvesting to a 10-day period. Asparagus will then build strength and reward you with higher yields thereafter. In the second year, cutting can be done for two weeks. After that, harvesting can build up to six weeks. Stop cutting when spears start to get thinner. Do not cut any that are thinner than a pencil. For most of the country, cutting time will range for mid-April to late-June for established beds. Either snap off the spear at soil level, or cut an inch or two below the soil level with a knife. The resulting, longer asparagus stalks store better. 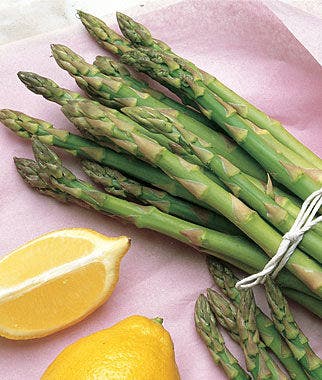 At the counter, hold an asparagus spear at both ends and allow it to snap at the natural point where tenderness begins. When cutting asparagus following a sand-pounding rainfall, it might be wise to remove the buds as grit can get firmly lodged in them. Select spears of consistent thickness for even cooking. Many recipes call for holding back on cooking the asparagus tips until the last few minutes after the thicker portions are nearly done. Freshly harvested tips are so tender they hardly need cooking at all.

Store asparagus spears in the coolest part of the refrigerator wrapped with a damp paper towel placed in a perforated or open plastic bag for up to 4 days. Do not place spears in a sealed plastic bag, as gases given off by the plant will speed spoilage. For brief storage, stand the butt ends of the spears in a shallow pan of water in a cool location out of direct sunlight.

Place asparagus spears upright (do not pack tightly) in a tall steamer, or lay flat in a steamer basket placed over one to two inches of water and cover. Steam about 4 to 5 minutes for thin asparagus and up to 7 to 10 minutes for the very thick spears. Check for doneness by sampling a spear. The asparagus should by firm with a bit of crunch. Salt and pepper to taste, or blanket with a béarnaise sauce or a white sauce laced with cheddar cheese.

Roasting brings out an extra depth of flavor.