Grilled garden-fresh vegetables are the hottest thing at the barbecue party. Corn, peppers, tomatoes, onions, squash, and other delicious vegetables are easy to grill, and “it’s guilt-free grilling,” says Dan Huntley, a pit master, food-truck proprietor, and author known in the Carolinas as Dan the Pig Man.

“People assume that for me it’s all grilled protein — but I get tired of pork,” Huntley says. “I like grilled seafood and vegetables, and right now my favorite vegetable has to be grilled corn.” For perfect grilled corn, pick it in the morning, put it on ice, and throw it on the fire that evening. When Huntley grills corn — with the husks pulled back, and just until the kernels begin to caramelize — “I’ve had adults eat four or five ears or corn and skip the meat,” he says.

Grilled vegetables are a caterer’s dream, Huntley says. Smoke enhances their flavor, and they really don’t have to be served hot, so the tricky question of timing is solved before you even get started. Grill the vegetables first, and then go on to the burgers.

Backyard grill masters love to experiment with rubs and marinades, but fresh vegetables really don’t need much prepping. A hot fire and a fresh zucchini are an unbeatable combination, Huntley says. He slices zucchini or summer squash lengthwise, about one-fourth inch thick, salts the slices lightly, and then, when the fire is ready, he dabs the moisture off and grills the squash until they are just a bit charred — browned, really — not burned. The slices should be “thicker than you think they should be,” he says. “If they’re too thin, they dry out into chips.” Grill marks are handsome, but it’s the slightly charred flavor that makes them so delicious.

Scallions or bunching onions are great on a grill, Huntley says. He makes bundles of about 20 bunching onions and grills them, turning the bundles once and then wrapping each bundle in wet newspaper and packing them in a cooler (without ice) for a time, so they steam. Serve them with a romesco sauce, made with tomatoes, roasted peppers, and almonds. “As an appetizer, it is primal,” he says. “It’s smoky, charred, and that sauce is just incredible.”

Huntley has experimented with grilled lettuce and such, but he certainly doesn’t avoid traditional favorites. He grills tomatoes on an iron skillet on a hot grill, which chars them and adds a smoky sweetness. Peppers are crowd pleasers: “You can’t go wrong with grilled peppers,” he says.

Most vegetables cook quickly on a grill, Huntley says, and char properly when you grill them without the lid on. Keep it simple, he says: pick what’s fresh and put it on a hot fire. “I don’t know any vegetable you can’t grill,” Huntley says. “What is more basic than fire, smoke, and vegetables?” 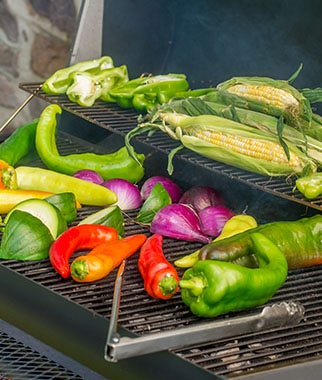