Some vegetables seem to reside on the fringes of food fashion, that's where you are likely to find rutabagas. The name itself sounds kind of fun, but not many gardeners, or cooks, have ever tried growing or cooking with rutabagas. They're now gaining traction in the food world as interest in cool-season crops and root vegetables picks up. Modern chefs rave about rutabagas. Gardeners should get into the game, too.

Rutabagas, also known as Swedes, sometimes called yellow turnips, and occasionally referred to as neeps, are grown for their solid round roots. They're related to cabbages and turnips. As with turnips, you can also eat the leafy tops. Rutabagas thrive in northern European climates and in the northern United States. Rutabaga's small, black seeds can be sown in mid summer, about three months before the first frost; cool fall temperatures, into early winter, are ideal growing conditions. Rutabagas develop their sweet taste after they have been exposed to light frost. They will also grow in warmer climates, but need a little longer to mature.

Purple-top rutabagas are the best-known variety. They grow to about the size of a softball and are dark purple above the soil line and buff-colored below. The flesh is golden. They can be roasted, pureed, sauteed, added to soups and stews, mashed with potatoes and carrots, or even pickled. Rutabagas keep well in a refrigerator, in a root cellar, or in the garden, mulched with straw.

A bumper crop seems to inspire more than the menu. At the Great Adirondack Rutabaga Festival every year in Keene, New York, kids decorate rutabagas with funny faces, people juggle rutabagas, and rutabaga royalty are crowned. In Ithaca, New York, a rutabaga curling championship is held at the end of December, on the last day of the local farmers market. They may not be suitable for the table after the curling competition, but it's great public relations for an under-appreciated vegetable. 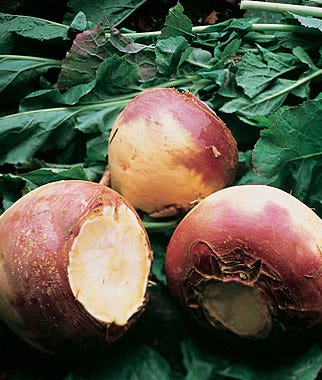