Gardeners eager to get their first seeds in the ground in spring often sow a quick crop of radishes, which grow quickly and can be harvested in a matter of weeks. Radishes are a terrific fall crop, too Ñ theyÕre traditional fare for Octoberfest.

Radishes are grown mainly for their roots, which are most often round but can be as long as a carrot or as fat as a beet. Japanese radishes, often called Daikon radishes, have white roots up to 14 inches long. Grocery stores seldom venture beyond round red radishes and stick-straight Daikons, but there is lots of variety in the radish family: ÔBlack SpanishÕ radish, an heirloom variety, has dark skin and snow-white flesh; ÔWatermelonÕ has round, white roots and a burst of crimson inside. ÔSalad RoseÕ is a deep pink radish about the size and shape of a small carrot and great for fall gardens: it is known as a beer radish.

In German beer gardens, long radishes are sliced with a special tool (cooking shops sell them) that makes radish spirals, which are served as a snack with pretzels or as a garnish on a plate with roasted meats. For a snack to go with a frosty mug of beer, you might be served a radish salad or a few bright red round radishes, sliced and sprinkled with cracked pepper and chives.

Octoberfest actually starts in September and lasts for a couple of weeks. If youÕre holding your own fest, radishes are accommodating: they keep well in a crisper. TheyÕre delicious no matter how you serve them: crisp and peppery in a salad, sliced thin on a sandwich, or roasted, stir-fried, pickled, or preserved.

All radishes produce abundant greens, which can be sauteed or tossed in salads. They are especially tasty when theyÕre young. Like radishes themselves, leafy radish tops are often spicy, a bit like mustard greens. Serve with a little polka music on the side. 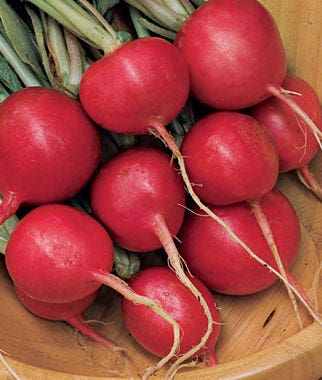