In the rush of the times, gardeners have forgotten their roots or at least some of them as well as other worthy vegetables. It's time to take a fresh look at some neglected root crops from the past.

There are a lot of things to discover in the world of heirloom vegetables, says Wesley Greene, a gardener at Colonial Williamsburg in Virginia and the founder of the colonial garden and plant nursery in the heart of the historic area. Greene cultivates a personal and professional interest in heirloom crops of all kinds.

Americans have forgotten how to eat roots, Greene says, but colonial gardeners depended on them. Turnips were cultivated more for livestock than for people, but carrots, radishes, beets, and other root crops were tended carefully in colonial kitchen gardens. Salsify is Greene's favorite forgotten root, he says, but he also likes parsnips, which look like pale carrots, and taste best after a frost.

In Williamsburg, Greene sows parsnip seeds in spring, while the soil is still cool. Radish seeds can be sown along with parsnips, in the same rows (this technique also works with carrots and beets). The radishes help space out the parsnips properly, and harvesting the radishes as they mature thins the rows. The parsnip crop then remains in the garden through the summer and needs little care.

In the fall, black swallowtail caterpillars, which consume parsley plants, are moved to the parsnip leaves they can eat all they want, Greene says, without harming the parsnip roots. In the mild-winter climate of Williamsburg, parsnips can be dug through the winter. In cold climates, a straw mulch placed over a row of parsnips in late fall will prevent the ground from freezing and allow you to dig parsnips long after frost. Preparing them is easy: I have always liked a roasted parsnip, Greene says.

Among other 18th-century root crops, Greene also likes Jerusalem artichokes (best made into a relish, he says), and large winter radishes, like Black Spanish, which taste spicy and are good in soups. Everyone will have their favorite forgotten root, Greene says. Visitors to Colonial Williamsburg can see them growing in the tidy colonial garden, where Greene greets visitors at the garden gate. His new book, Vegetable Gardening the Colonial Williamsburg Way, gives modern gardeners a lively look at colonial crops, and sows many a seed of inspiration. 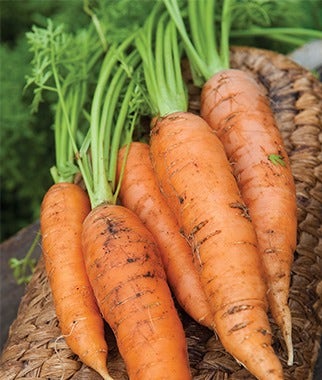