Spring Bulbs- Layering in a container

Just as small spring bulbs arrive in the garden before the daffodils, you can have a succession of bulbs in a container replicate the flowering. The key is to layer the bulbs in the container with the smaller or early flowering bulbs above the later flowering bulbs. Containers that are filled with bulbs can be displayed indoors or outdoors.

To have a succession of bloom from your bulbs you need to have a container that is large enough to have several layers of bulbs. Typically that would be a container that has a depth of at least one foot. The container should also be quite wide so that all the bulbs will fit in and grow together.

When you have chosen your container, put a layer of potting mix into the bottom. The level should be approximately where the normal planting depth for the largest bulb or about six inches below the top of the container for large daffodils. Place the largest bulbs upright on the potting mix, and then cover them with more mix. Place smaller, earlier blooming bulbs on the new, higher surface and cover these too. Finally add some small bulbs to the top of the container and finish with a layer of mix that is just below the rim of the container. Water the container well and place outside until spring warmth brings the top bulbs out of dormancy.

For indoor planting, or for those in warm climates, you can chill the bulbs for 3 months in your refrigerator before planting.

Designing the layers is a very individual matter but aim to have one plant in bloom as the other is going past bloom as well as fresh new growth to hide decaying brown leaves. You also want to see as many blooms as possible, so aim to have later growing bulbs growing behind the ones that are in bloom. One way to design the whole assemblage is to turn the empty container upside down on a piece of paper and draw around the circumference. Remove the container and you will be able to place the bulbs onto the paper and see where the individual bulbs need to be placed to get the best effect. 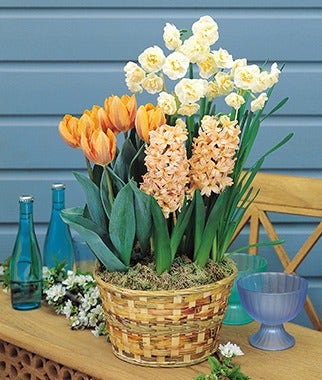