Although insects are known to target weak plants, even the best gardener has to deal with some insect infestations. Being able to recognize and treat these attacks early is vital to keeping the whole garden healthy.

Integrated Pest Management (IPM): IPM is a way of minimizing the damage caused by insects while at the same time using the least toxic remedies. Key to treatment is correct identification of the insect that is damaging your plant. When you know the insect you can learn about the life cycle and treat it at the best stage of growth. For a many insects the best stage is to treat or remove the eggs which are generally found under the leaf. Removal of the whole leaf forestalls any further damage to a plant. Sometimes it is worth allowing a little bit of damage if you know that the life cycle of the insect is limited to just a week or two.

It is also important to watch for problems in the garden. Many infestations can be avoided if you walk around the garden frequently and treat the problem before it gets out of control.

Treatment Options: Whether you have children or not, it is environmentally healthier to use the least toxic insect treatment. For tiny eggs and very small whiteflies, this can be as simple as a strong stream of water from a hosepipe. More sticky insects which cover themselves with a hard shell need an oily soap which covers the shell and kills the insect inside. Common dish soap in solution works well for many of these insects.

Worms: There are numerous worm-like insect that can affect the garden, some of which are specific to a host plant, and others enjoy a variety of plants. In general the worms eat the soft tissue of the leave and smaller ones burrow into the leaf itself to feed on the interior fluids. Green Cabbage Loppers, pale Canna Leaf Miners, and Army Cutworms are just some of the wormlike creatures. Removal of the egg stage is the best remedy but as we rarely see the eggs it is necessary to treat the insect. Cutworms, which affect newly planted seedlings, can be avoided by putting a ÔcollarÕ round the plants to protect them.

Beetles: Beetles have hard coats and can be seen marching across the leaf, chomping as it goes along. Colorado Potato Beetle, Japanese Beetle and the Cucumber Beetle are all common in garden across the continent. It is best to be vigilant with your garden and treat the egg/grub stage before you have problems. Beetles are usually large enough that they can be physically removed and thrown into a bucket of soapy water. Covering the crops before the beetles arrive also prevents damage.

Crawlers/Flyers : These are the smaller creatures, many of which are microscopic. The damage from just one of these creatures is not large, but they usually arrive en masse and cause anything from disfigurement to leaf damage. Aphids, Mealy Bugs and Spider Mites like a variety of hosts and are common particularly in summer. Many of these creatures need a horticultural soap to wash them off.

Most gardens will be affected by a few insects, but finding them early, identifying them correctly and treating the problem early will keep the garden healthy without excessive chemical use. 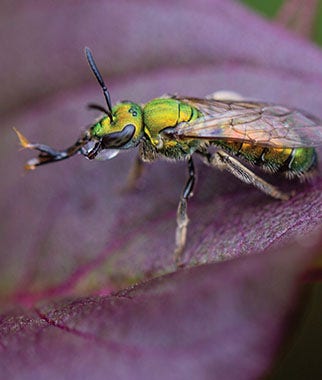