Dazzling, dancing columbines sometimes go by the name Granny’s bonnet, and it would be a wonderful grandma indeed who wore a cap like this. Columbine flowers are flouncy affairs, sometimes highly ruffled, sometimes with pointed spurs on the back, and always charming. They are easy to grow from seed and flourish in the dappled light of woodland gardens or in a lightly shaded flower bed. They bloom prolifically in spring and early summer.

Columbines are native to Asia, Europe, and North America. There are about 70 species, and hybridizers have been tinkering with them for 100 years or more, producing many showy and delightful flowers. The blooms are typically two-toned, but some are pure pink, purple, yellow, or white. Most have gently nodding flowers, but some have blooms that face up. Hybrids usually have large, two- to three-inch flowers that seem to float on the ends of stems up to three feet tall. Rock-garden columbines stand only eight or ten inches tall, with correspondingly tiny blooms.

Gardeners tend to favor showy columbine hybrids, many of them crosses with North American natives. ‘Origami’ columbines, which are crosses with Colorado’s native blue-and-white columbine, bloom on stems two feet tall; the early-blooming ‘Harlequin’ tosses its flowers on three-foot stems. ‘McKana’s Giant’ was introduced in 1955 and remains one of the most popular hybrids, with large flowers and long spurs. ‘Lime Sorbet’ is a frilly, double columbine, without spurs, hybridized from a European species.

For all the delicacy of their blooms, columbines are tough plants that do not need pampering. In time, they seed themselves around the garden, but without becoming a nuisance. They are elegant companions for spring bulbs and perennials. In a woodland garden, they come up with Solomon’s Seal and hostas; they bloom amidst forget-me-nots and epimediums. The plants do not have much impact later in summer, but their pretty blue-green leaves, which look something like flat-leaf parsley, only more delicate, persist through summer’s heat. All columbines can be picked on long stems for bouquets, so you can enjoy them up close. 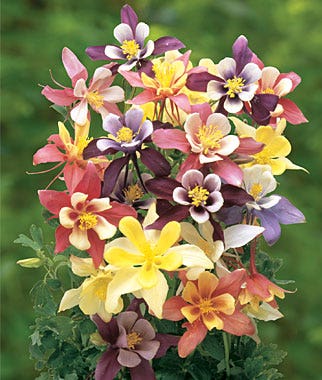