Many gardeners know that spring-flowering bulbs such as snowdrops, crocus, and daffodils bloom in early spring when it can still get below freezing at night. Generally, if a biennial or a perennial is rated hardy for your zone, it will have no problem coping with frost in spring, even though it may be blooming much later in the season. However, columbine, yarrow, and Bonfire euphorbia have foliage in spring that is an attractive complement to spring-blooming bulbs. When the bulbs die down, these perennials are in their prime and hide the dying bulb foliage. Primulas and hellebores also bloom while there are still frosty nights.

Annuals that tend to self-sow, such as larkspur, poppies, and alyssum, have seedlings that tolerate frost. They won't be blooming before frost ends, but you can sow them as soon as the snow is gone by sprinkling them on soil that was prepared the previous autumn. If conditions are favorable they will soon self-sow for you. Sweet peas have a reputation for being a cool weather plant, but the seed doesn't like to be sown in really cold soil, so wait until frost is almost over before sowing them. Once germinated, they will thrive in a cool northern summer.

There are a few plants that get a slow start in spring but happily tolerate frost in fall. The mallow family, including hollyhock mallow and lavatera, is most notable for this. Ornamental cabbage and kale, and many ornamental grasses, while not technically flowers, are used as such and both provide beauty until buried under snow. Annual alyssum and snapdragons will continue to bloom through light frosts and border phlox and repeat-blooming roses will often still be blooming as well. Violas and pansies take the prize for longest period of bloom in a cold climate. They will start blooming in early spring before frost is done, will continue blooming through a cool northern summer and on into fall, until stopped by several hard freezes.

Many of the well-known annuals, such as petunias, marigolds, zinnias, cosmos, impatiens, and coleus need to be started as seeds after all danger of frost has past, and will blacken at the first touch of autumn frost. This means you can't start them from seed outdoors and expect to get much, if any bloom. You will either have to buy them as started plants, or invest in grow lights or even a greenhouse so you can start them indoors while it is still too cold for them outside. (In most cases a windowsill will not provide sufficient light, resulting in pale and leggy plants that don't do well.) All plants started indoors need time to adjust to outdoor conditions, a process called hardening off. 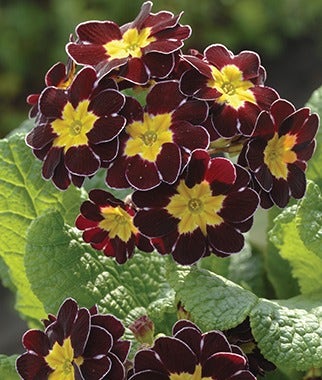