Each country has unique cuisine, the distinctive flavors having developed over centuries of testing and tasting, at the hearths of simple peasants, the busy stoves of home cooks, and the kitchens of master chefs alike.

To enjoy these time-honored flavors at your own table means having the right ingredients. Many cities have international markets and most supermarkets will carry at least some things you need. But an enjoyable way to have them close at hand is to grow ingredients yourself in an “international cuisine garden.” This means they’re fresher, chemical free, and cheaper. One oregano plant can flavor your favorite Italian pasta dishes for years, an inexpensive alternative to repeatedly buying pricey small packets of herbs at the grocery.

Certain ingredients are common ground for a host of cuisines, from Thai to Mexican to Italian. For example: onions, cilantro, garlic, basil, tomatoes, eggplant, and peppers. Familiar garden plants all, including them in a cuisine garden will allow you plenty of options when planning your menus, or even if you have a sudden craving. Below are additional ideas for some of the most popular international fare.

Let’s start with Asia. For Thai dishes, it’s smart to also have access to Thai basil, mint, shallots, chili peppers, cucumbers, and sweet potatoes. Lemon grass is another common Thai ingredient. Though not hardy in much of the U.S., it’s easy to grow in a container and protect over the winter. Chinese and Japanese cuisines include bok choy, Napa cabbage, daikon radish, green onions, snow peas, soybeans, and perilla. Though Indian cuisine is most noted for its spices, it also employs such tasty and widely grown garden plants as green peas, cauliflower, spinach, okra, pigeon peas, potatoes, and pumpkin.

For Mexican cooking, legumes (black beans, pinto beans), corn, and a variety of peppers (poblano, jalapeno, ancho, serrano) are key. Though you probably won’t grind your homegrown corn to make tortillas, roasted corn on the cob is a popular street food in Mexico, and you can use the husks for tamales. A few less-familiar ingredients are jicama, chayote, tomatillo, and nopales or prickly pear cactus. Some gardeners might shy away from growing prickly pear, especially if they have young children, but there is a prickle-less form (Opuntia cacanapa ‘Ellisiana’).

Italy makes excellent use of the baseline ingredients mentioned earlier (basil, garlic, tomatoes, etc.), most famously in pasta and pizza. (A fun project for kids is to create a pizza or spaghetti garden – including spaghetti squash.) But Italian cooking also incorporates a tremendous variety of other great garden plants: asparagus, Tuscan kale, Savoy cabbage, radicchio, endive, artichokes, zucchini, fennel, bell peppers, and the Mediterranean herbs rosemary, marjoram, oregano, parsley, sage, and bay leaves. And probably more than any other European country, Italy has a dizzying range of distinctive regional cuisines with plenty of signature dishes that your veggie garden can bring home, such as pesto from the Liguria region, ribollita from Tuscany, and caprese salad from Campania.

You can take a tour around the world without leaving your kitchen, educate yourself about local cuisines before making that big trip, or relive fond epicurean memories from your travels. All it takes is the right ingredients growing in your garden. 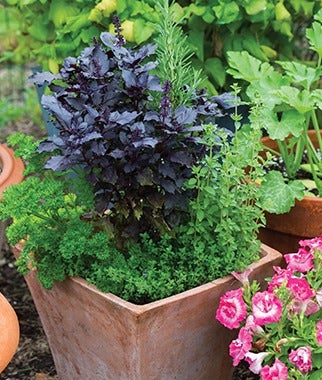