“We love growing soybeans,” says Michael Peterson of Madison, Wisconsin. “They are wonderful. That’s the reason to grow them — because you love to eat them.”

Peterson and his wife grow soybeans so they can snack on the tender young beans, which are known as edamame. They first experienced steamed or parboiled edamame in Japan, served in a bowl, sprinkled with sea salt. The beans are served in the pod: you put the whole pod between your teeth, and as you pull it out the beans pop into your mouth. “It’s like green popcorn, in a way,” Peterson says. “It has the same compulsive quality — they are really great finger food.”

Back home in Madison, they planted soybeans in their garden in early summer, after the soil had warmed up, and harvested them while they were still green and tender. They are an easy crop, Peterson says. If you can grow bush beans, you can grow soybeans. The plants tolerate heat, and they’re bushy enough to shade the soil around them, which helps conserve moisture in the soil. Peterson grows his soybeans in raised beds, and mulches with straw.

Soybean plants produce many pods per plant, and they will be ready to harvest all at once, usually in about 10 weeks. Harvest when the pods are plump and green. Tasting a bean in the garden is not a good way to judge ripeness, because raw beans are tough and even a little bitter, but after they are cooked, “they’re like a little nut,” Peterson says.

Unless you’re planning to parboil and then freeze them (they can be reheated later), it’s best to stagger the sowing time, planting a row or two and then planting again a week or 10 days later. Staggered plantings allow you to harvest over a longer period of time. 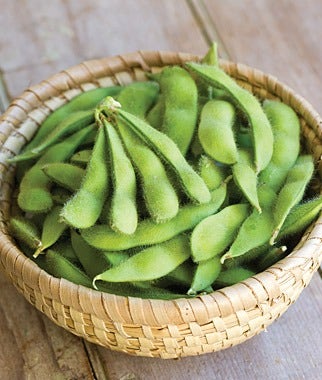