With their pleasing crunch and tangy taste, pickles dress up everything from sandwiches to salads. While it may seem a complex process to transform a cucumber into a pickle, it's actually relatively easy. You can create piles of pickles from pounds of cucumbers at home.

"Pickling is a skillful blending of spices, sugar and vinegar with a fruit or vegetable," says University of Minnesota Extension food safety educator Suzanne Driessen, "What is rewarding for me about pickling is the taste, and a sense of pride and preserving lost traditions."

The basic process is simple. Slice the cucumbers. Add the spices and the slices to sterilized jars. Cover the mixture with a hot vinegar and water pickling solution. Seal with hot canning lids and cook for a bit in a boiling water bath. Let the flavors develop for a few weeks and you've made your own pickles.

Pickling is also economical. By adding vinegar and spice, you add a lot of value to your inexpensive or homegrown vegetables.

For perfect pickles, Driessen says to start with the freshest cucumbers.

The type of cucumbers used is important. Look for unwaxed cucumbers designed for pickling. If you grow your own cucumbers choose varieties like Burpee 'Pickler Hybrid' specifically bred for pickles. If you need extra, farmers markets are a good place to look. Often, farmer's market cucumbers won't be waxed. Wax on the skin clouds the brine and prevents flavors from penetrating the flesh as effectively.

Proper pickling is all about proportion. Just googling for recipes can get novice picklers into trouble. The same is true of using old family recipes, says Driessen. "Look for recipes on sites that reference tested research recipes and methods. University and canning supply companies are reliable sites," she says. University of Minnesota Extension offers food preservation resources on their website.

Acid, including vinegar, when added to vegetables prevents microbes from growing and causing spoilage.

"The amount of acid added is very important to the safety of the product and to get the right 'pickled' flavor - that tangy flavor we all love," said Driessen, "So never alter the proportions of vinegar, food or water in a recipe."

Make sure to use the right vinegar and salt. Check labels to make sure your vinegar has 5 percent acidity. Also, use canning or pickling salt. Additives to table salt can cloud the brine or darken the pickles.

Recipes will vary but this is the general process. To get started, chill the sliced cucumbers in ice for 4 to 5 hours, said Driessen. Run the canning jars through the hottest cycle on your dishwasher or boil them briefly. Mix the brine. Depending on the recipe, brine can include, salt, sugar, some spices along with water and the vinegar. Bring it to a boil.

Add fresh spices like dill and garlic to your canning jars. Pack sliced cucumbers of similar sizes into jars. The blossom end should be cut off and there should be inch headroom between the top of the cucumbers and lid to ensure a proper seal.

Pour the boiling liquid over the cucumbers and fresh spices. Seal the jars and add them to a boiling water canning bath. Check recipe times making sure to allow for changes in altitude. A longer boil time is required at higher elevations. In pickling, you don't cook the jars as long as you might in other forms of canning. Process time can be as little as 15 minutes. Allow to cool. Check for a good seal and store in a dark place for 4 to 5 weeks for the best flavor development.

Though an old way of preserving food, there have been modern updates. It used to be that firming agents like lime, alum or grape leaves were added to pickles. It has been found that soaking the vegetables in ice is the best way to achieve firmness, said Driessen.

"Old recipes are no longer safe to use," she said, "In the late 1980's, canning recipes and processing times were retested." New guidelines designed for improved safety were released in 1994. Driessen said to use recipes released after 1994.

Pickling shouldn't be limited to cucumbers.

"There are so many foods that can be pickled. I love trying new stuff. Last year I pickled red beets, green beans, relish and jalapeno peppers," she said. 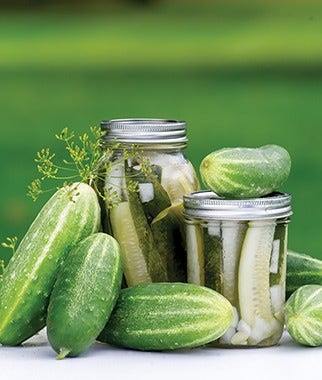