There’s something so homey and familiar about a pot of red geraniums parked on a front stoop. A bright spot in the landscape, inviting visitors in. Which makes sense, since in the Victorian “language of flowers” the scarlet geranium means “comfort.”

But geraniums have come a long way since Victorian days, now presenting a dazzling array of choices. And while gardeners can’t seem to get enough of the classic “Zonal” geraniums, other beautiful types include ivy-leaved, Regal, and scented geraniums.

Most of the 20 or so species of Pelargonium (from the Greek word pelargos, meaning “stork” since the seed heads look like a stork’s bill) are native to South Africa. Brought to Europe in the 1600s, the first geraniums quickly became a hit and since then thousands of cultivars have been developed.

The Zonal geranium (Pelargonium x hortorum), so named because of the dark horseshoe-shaped marking on the leaves, has become a fixture of suburban gardens and city window boxes. Red remains the number one color, and there are plenty of red shades to choose from, but Zonals also come in salmon, white, pink, orange, violet, and bicolors. Typically used as annuals, they can be counted on for a bright pop of color for months on end, and are easy to grow if you follow a few simple guidelines.

Zonals need plenty of sunlight, but can take a little shade in the hottest part of the afternoon. Since they require night temperatures in the 50-60 degree F range to blossom, they perform best in late spring to early summer and again in autumn. So they might lag a bit in the heat of high summer. Give them moist, well-drained soil, mulch to keep roots cool, monthly feedings, and good air circulation.

If planted in a container, allow the soil to dry out a little before watering to ward off root rot, but definitely avoid extremes – a stressful cycle of wilting and heavy watering will cause leaves to yellow and fall off. And be diligent about removing spent flower heads to keep new ones coming on.

Ivy-leaved geraniums (Pelargonium peltatum) are similar to Zonals but with smooth, waxy leaves. They have become more widely grown with the explosion of container culture since their naturally trailing habit makes them perfect for hanging baskets. And they’re ideal to suspend on a porch because they need a slightly cooler and shadier environment than Zonals.

Regal geraniums (Pelargonium x domesticum), sometimes called Martha Washington geraniums after a popular 19th century cultivar, have pleated, ruffly leaves and showy flower clusters. They need a little more water than other geraniums, cooler temperatures, and filtered light. Since they don’t thrive in high heat and humidity, they are more suited to Northern locales. Perhaps the best way to enjoy Regals is to buy them while they’re blooming, then toss them once they’re finished, though they can be grown as houseplants.

Scented geraniums are actually a myriad of species, cultivars, and hybrids, each with a distinctive aroma to the foliage. Especially popular with herb gardeners, scented geraniums can smell like almonds, apples, coconut, lemons, roses, nutmeg, peppermint, strawberries, chocolate, or even Old Spice cologne. The rose-scented ones have been important in the perfume industry. And many find their way into jellies and iced teas as flavorings.

Though the flowers are usually more wispy than the Zonals, Regals, and ivy-leaved types, scented geraniums have a remarkable array of foliage forms: puckered, curled, or rounded, resembling ferns, oak leaves, or grape leaves, with textures from velvety to coarse to sticky.

While some scented geraniums are hardy to Zones 7-8, most need to be brought indoors when temperatures drop to about 45 degrees F. Native to areas with low rainfall, give them good drainage and plenty of air circulation. Be forewarned, collecting scented geraniums can be addictive! 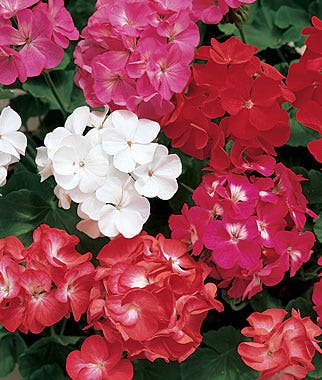