Legumes- All in the (Pea) family

You've heard the saying "money makes the world go around." Well, actually, it might be legumes that make the world go around. And they've been doing it for at least 9,000 years, starting as food, dyes, and medicines, and now found in everything from cosmetics to varnish to printing ink.

Globally, cultures have for centuries depended on members of the Fabaceae (old name, Leguminosae) for survival, and there are those who even credit legumes with the expansion of civilization. Thousands of years ago as peoples on different continents shifted from a nomadic to a farming lifestyle, legumes segued from wild-collected food to some of the first domesticated crops (both for humans and livestock). And a population with plenty to eat, expands.

As it happens, the amino acids in legumes are perfectly complemented by another group of early crops - grains - to create complete proteins. So with meat always at a premium, hand in hand legumes and grains fueled society, literally. Which is why we find such classic cuisine pairings as lentils and rice in India, lima beans and corn in North America, chickpeas and couscous in Africa, and beans and tortillas in Mexico.

And the Fabaceae is not only important because its members are tasty and nutritious. In fact, without legumes, other living things just might not exist. It starts with nitrogen, a key player in the basic functioning of all plants and animals (for plants, nitrogen = fertilizer). There's lots of nitrogen floating around - the atmosphere is about 80% nitrogen - but it's not accessible.

Here's where the legumes come in. Underground, in little nodules on the roots of most Fabaceae species, Rhizobium bacteria live in symbiosis with their host plants. These bacteria can take atmospheric nitrogen and convert it into usable forms (known as "nitrogen fixation"), nourishing the plant. When we eat a legume, we get our nitrogen. And when legume plant parts decay, like fallen leaves or old roots, other plants can scarf up the natural fertilizer. That's why, for thousands of years farmers alternated other crops with legumes (called crop rotation) to keep the soil good and fertile.

In addition to field-crop plants, among the 20,000 or so species of the Pea Family you can find everything from trees like acacia to herbaceous plants like clover to vines like lablab bean. The beautiful flowers typical of most legumes, with their "banner, wings, and keel" arrangement, have made many of them superstars in the landscape - wisteria, false indigo (Baptisia), redbud, sweet peas, locust trees, yellowwood, lupines, golden chain (Laburnum), coral tree (Erythrina), cassia, and false lupine (Thermopsis). A few more kin are indigo, fairy duster (Calliadra), mimosa, orchid tree (Bauhinia), alfalfa, carob, licorice - and kudzu!

In home veggie gardens the Pea Family also shines, with cool-weather peas in the spring and heat-loving beans in the summer. And since legumes have been cultivated for such a long time, there are hundreds of varieties. Recently certain varieties of soybeans have become popular to eat green as a snack food, called edamame. And if you live where summers are hot, like the Southeast, peanuts are also easy to grow.

While legumes certainly played a critical role in the start of human civilization, they might now come to the fore once more. They show potential in treatments for illnesses like cancer, alcoholism, and Parkinson's disease. (No surprise since in China alone over 1,000 Fabaceae species are used in traditional medicine.) To counter the pollution created by manmade nitrogen fertilizers, the age-old use of crop rotation is coming back in vogue. And the versatile soybean is being studied as a biofuel to replace petroleum products.

Legumes are also a natural fit for healthy living. They're low in fat, high in fiber and protein, offer B vitamins and iron, and contain no cholesterol. They're easy to grow and many can be dried and stored for years. In fact, legumes might just save the world - again. 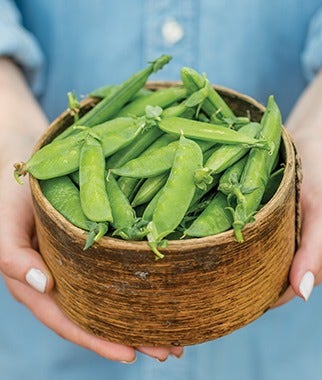