J. P. Morgan, the celebrated financier, famously observed, "If you have to ask the price, you can't afford it". I've always viewed this quote as a sort of anti-proverb along the lines of "You can't be too rich or too thin" and "Living well is the best revenge". These are members-only bromides to comfort the comfortable and disconcert everybody else.

Mr. Morgan made his famous utterance when asked about the cost of maintaining his yacht. But he might as well have been referring to the costs of Old Master paintings, gems, mansions or railroads—all of which he acquired in abundance. I doubt the plutocrat was thinking of the cost of purchasing fresh tomatoes, red peppers or lettuce.

But even J. P. might have paused at the prices on view in today's grocery produce aisle. "Surely, you jest", I imagine him thundering. "What species of priceless vegetables might these be? Virtuoso Faberge' fancies? A still life by the Flemish master Martinus Nellius? Alas, at these mad prices, include me out!"

As I write, U.S. prices of fruits and vegetables are rising at an alarming rate. Yet in January the government's Economic Research Office and the U.S. Department of Agriculture confidently estimated a modest rise in U.S. grocery prices—a mere 2-3 percent, up from the .8 percent increase in U.S. food prices from 2009 to 2010.

The estimated increase was hardly likely to precipitate howls of outrage from TV's talking heads or have editorial writers pummeling their keyboards to produce fevered polemics. So, no worries, right? Wrong.

The Associated Press reports February's increase in wholesale food prices represents the biggest jump in the 36 years. Retail food prices, meanwhile, rose 3.9%, the most since November 1974.

Government economists overlooked a few variables. Take corn, an obvious factor. For starters, there were Iowa's unseasonably warm July 2010 nights, causing the corn crop to mature too early, resulting in diminished output and higher prices. With rising gas prices, there is increased demand for corn-based ethanol—which already accounts for 12.5% of the U.S. corn production—again lifting prices. And corn reserves are the lowest they've been in over 15 years.

The economists must have been blinded to the 15 percent spike in global food prices from October 2010 to January 2011, and the 30 percent price rise in the past year—the biggest jump since the UN started tracking food costs in 1990.

And—no disrespect to Iowa—let's not forget weather's impact on global food output. The last year has not just seen a perfect storm or two, but a perfect storm of storms. Devastating droughts and floods in Australia and Russia. Floods in Canada. Low rainfall in Europe and South America. Excessive rain in India. Record-shattering winter freezes in California, Mexico and Florida.

Up to now, America has been insulated from the more extreme food price gyrations. For one thing, Americans spend only 10% of their income on food, while in less developed countries food costs can devour 50% of a family's budget. Americans have another advantage, too; world food prices are reckoned in dollars and our country remains the world's leading food producer.

Take the briefest stroll through your local grocery and the folly of the government's food price projections is apparent in every aisle. Food prices are rapidly increasing. Produce prices have doubled in some parts of the country.

Fresh fruits and vegetables are the most volatile of items in the supermarket. Many foods in a supermarket's main aisles are more processed food products, than food per se. They are manufactured, rather than grown in a field. Reckoned in real dollars, the prices of fresh fruits and vegetables have doubled since 1980 relative to other grocery items, which have budged only a little.

What's the sticker-shocked consumer to do? My fellow Americans, the answer to rising food costs is right there in your own back yard. The savings you can realize by starting your own home garden will astonish you.

Let's talk tomatoes. Right now, medium-sized tomatoes at my local grocer's are priced from 80 cents to $1.20. A single tomato plant in your home garden will, at a conservative estimate, produce 40 to 50 medium to large fruit in a summer—a bounty that would set you back anywhere from 32 to 48 dollars at the supermarket.

It gets better. A seed packet contains 25 guaranteed seeds out of 30 total. We set the average plant yield at 40 dollars, and multiply it by 25. Your little tomato patch yields you a thousand dollars worth of store bought tomatoes from a seed packet that costs you three or four dollars. Your return on investment? 250 to 1 or 25,000 per cent. J. P. Morgan would not pass up that kind of opportunity.

And your homegrown tomatoes are ruby red, juicy beauties, bursting with just-picked flavor and fragrance—everything those store-bought "virtual tomatoes" aren't.

The home gardener can reap extraordinary savings on every fruit and vegetable. Your garden of bargains produces a healthy harvest of culinary pleasure, serenely wholesome recreation and out of this world savings. As J. P. might put it, "If you have to ask the price, grow your own." 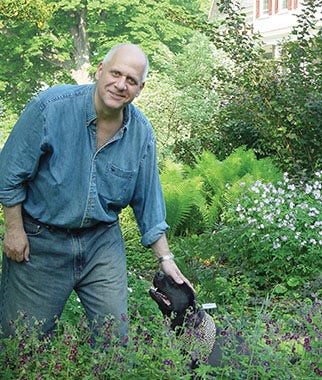